As another year rolls over, I look back at the three words I chose for the previous year to see how I did, then look at the new words for the coming year. I tend to pick words that are verbs when I can, because reciting them works as a subtle imperative for me to actually do them. Let’s see how 2014 went.

Discern. Did I get better at measuring and filtering? Did I do a better job of quantifying myself? Yes, actually. I spent a lot more time measuring sleep tracking and a variety of other things, and professionally, it was a banner year for measurement. Measurement habits are definitely something I can carry into 2015.

Decide. Did I get better at making decisions? Yes, but they weren’t always well-informed. So I got better at the end result of decision making, but the decisions felt less correct this past year than they have in the past.

Discover. Did I get better at making discoveries? Quite a bit. It was a terrific year for new creations, new inventions, and for learning entirely new topic areas.

Overall, two out of three ain’t bad. So how do we top that? We come up with 3 new words, of course! 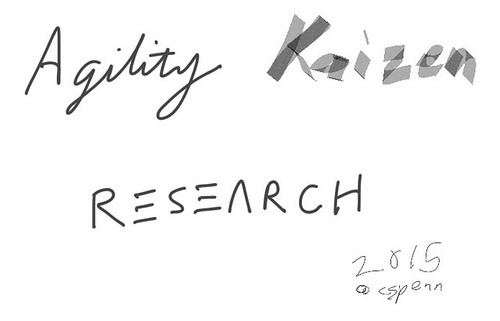 Agility. Agility is about being able to react nimbly. In order to do so, you must be flexible and you must be alert. These are two areas where I think I’ve got some growing to do in 2015, physically, mentally, and spiritually.

Research. Over the past week, while on vacation, I’ve working on a new book. Each day, I’ve sat down and cranked out a couple thousand words, and it’s felt absolutely wonderful. This year, I want to dig in more on the topics I care about. That means less casual reading and more in-depth study. Fewer listicles and more scholarly papers. There’s a world of knowledge out there, growing daily, and it’s something I feel an urge to tap into.

Kaizen. Radical change rarely happens, save for cataclysmic events. Tiny change, incrementally done, often sticks because the commitment grows quietly in the background. Instead of 30 day challenges and “make the leap”, this year I want to break up improvement processes into more increments so that they become second nature almost immediately. For example, instead of a big “drink more water”, the first tiny increment would be, drink water first thing in the morning, before coffee. Later down the road, I’ll add a little something in, but that’s an easy habit to start.

What are your three words?