Wouldn’t it be nice to be able to crank out content faster and still have it be great quality? We often approach the development of content like software developers used to develop software, in a method called waterfall, or the software development lifecycle. This entailed a long, rigorous process in which you’d spec out requirements, do wireframing of the plan, get sign off, write code, send it out for QA testing, and ultimately ship a software product. The problem with waterfall methods is that more often than not, because the project took a long time, by the time the software shipped, it was either out of date or not what the users wanted.

This might sound a lot like your content marketing process, especially for long-form content like webinars and eBooks. By the time 6 or 12 months have gone by and you’ve written the book, it’s out of date, or it’s not at all what you originally set out to do – and your audience doesn’t want it.

So how do you fix this problem? If you’re not familiar with the agile software development process, it’s a response to waterfall methods that software developers came up with in 2001. In agile development, you have a backlog of feature requests, with two week rapid work cycles in which you do daily quick meetings to check in on the project, iterate, and adapt.

Inside of those two week cycles, code is written that can be deployed (or at least checked in) and products iterate rapidly, often adjusting throughout the development process to changing needs. QA is done in tandem with writing code so that there’s continuous quality checking, rather than letting bugs build up and ultimately create a massive QA hairball at the end of the process. The ultimate goal is to develop software that delivers what the user wants in a timely fashion.

Sounds familiar, doesn’t it? Content marketers strive for the same thing. So how might we adapt this methodology to content marketing? Take an eBook you’re going to write. In the backlog, you’d dump all of the ideas and potential topics that your eBook would cover, every request, all of the stuff. You’d then look through the backlog, find the things that you could effectively write about in the next two weeks, and start writing.

Each day, you’d approach an idea iteratively, researching it, writing it, and editing/proofing in the same short cycle, and at the end of the two weeks, you’d review what you accomplished, what got left behind, and what you still want to work on. Those ideas that are still valid, you’d put back into the idea backlog, clean it up and remove things that were no longer topically relevant, and then select the next batch of ideas that you’re going to write about.

Agile development can easily be ported to other forms of content as well. Think about how you blog. Instead of one big project, you’d use the same methodology to keep blog ideas around, then select the ones you’re going to write about, crank them out in small, fast batches, edit, and at the end of the process you’d have a large pile of content ready to publish. Along the way, if something timely and topical came up, you could simply put it into the daily adjustments, bumping something out of your two week cycle, and still be able to create content at scale without losing too much quality.

The advantage of this sort of process is that you could work on 10 or 20 different posts and have them in varying states of completion, but not necessarily have to linearly write each one to completion before starting the next. You’d approach it more like software in that you’d write a little bit on several posts at a time until the end of the two week cycle, at which point you’d be ready to ship. 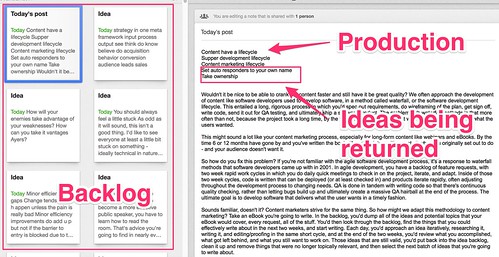 This is the methodology that I use on this blog, on my personal blog, because it’s so effective at enabling you to create a large quantity of content quickly. Evernote is my backlog, where I store the ideas as they happen, and then I select the ideas I want to work on, read, write, and edit inside each idea, and ultimately “harvest” the ideas for publication.

Give the agile development process some thought and see if it would work for your content marketing efforts!