Whose rules are you playing by?

Over the weekend, my daughter came to me to tell me all about a new iPad video game she had found called Wonder Zoo. If you’ve never heard of it (I certainly hadn’t), Wonder Zoo is a free-to-play (with in-app purchases) game that resembles Zoo Tycoon or Sim Zoo. You collect animals, assemble a zoom, follow quests, and level up. It’s got all of the stock tropes of a typical time-killer video game that wants you to spend lots of real world dollars to make gameplay more fun. 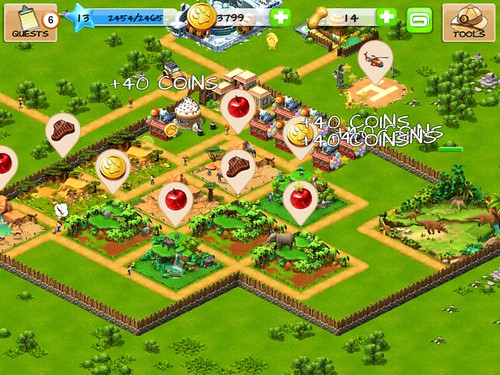 When she brought it to me, my daughter was looking at the selection of buildings available in the game. There was a drink stand, a hot dog stand, a balloon stand, and a few other ones. She said she wasn’t sure which one to pick, they were all so cute. I said, what’s the goal of the game? Is it to make coins so that you can go and capture more animals? She agreed, and I switched applications to Google Spreadsheets. I said, let’s get the data. How many coins does a drink stand earn in what time period? How many coins does a hot dog stand earn in what time period?

We did the math and it turns out for efficiency’s sake, even though they’re not nearly as cool looking, balloon stands generate the highest rate of return. Even though from a real-world perspective it was illogical to build a zoo without refreshments, rest rooms, or decorations, from a gaming perspective, a zoo filled with balloon stands made the most financial sense. Likewise, when it came to laying out the zoo, I suggested that instead of laying it out randomly or by attractiveness, that she lay out the zoo in a perfect grid system to maximize the number of revenue-generating exhibits she could place before having to invest in more land.

She asked me why I don’t like cute zoos. I said that cute is irrelevant in this particular case. I told her that the game developers are counting on you to make emotional decisions and follow rules that are only in your head about what a zoo is “supposed” to look like. The actual rules of the game are different than the rules we assume in our heads. I mentioned that the developers – and their revenue model – are counting on these assumptions and the subsequent bad decisions you’ll make from them in order to make money on you. She could do what they wanted and not have much fun, or make rational, logical, forward thinking choices that aren’t as much fun in the beginning, but would provide a solid foundation for her to play the game how she wanted later on.

The core life lesson for my daughter – and for all of us as business professionals – is that we can do what other people want us to do, or we can set ourselves up for success so that we can do what we want to do. Make sure you’re optimizing for what the rules of the game actually are, and not what you think they are.