I received the Keurig 2.0 brewing system via Klout as part of a Klout perk. While the instructions from Klout say that I’m under no obligation to review it, I will anyway. So, here goes.

The system itself has a larger footprint than equivalent current models. It’s probably 25% larger than the equivalent previous model. 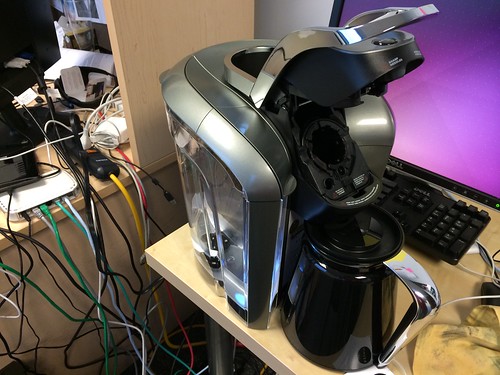 The simple buttons have been replaced by a somewhat intuitive touchscreen, though the navigation gets confusing when you try to brew a carafe rather than a cup. I intentionally did not read the manual, because not reading the manual best simulates my state of wakefulness prior to coffee.

The newest feature is the ability to brew a carafe with a significantly larger K-Cup than the single service K-Cup.

So, is the system any good? For the positives, it’s much quieter than the older table-top models. Instead of the loud buzzing sound it makes when drawing water from the reservoir, it now makes a quieter pulsing sound. If you’ve ever tried to brew a K-Cup early in the morning while not waking anyone up, the new machine is definitely quieter.

For the negatives, a couple of big sticking points. First, the new system incorporates what is effectively DRM. The system scans the top of K-Cups for the Keurig logo and if it doesn’t see it, it won’t work. I predict a cottage industry in taking used K-Cup foil seals and cutting out the logos to stick onto third-party cups to keep them working. 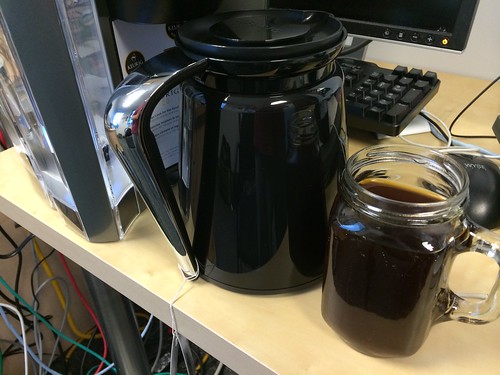 Second, the new carafe feature is nice in concept but the results are poor. K-Cups already tend to be a little on the weak side – in order for me to get a cup of coffee that matches my tastes, I typically have to brew two 6-ounce cups of one of their bold roasts. The carafe setting has no ability to control how much water goes into the carafe vs. coffee, so you get a weak, watery pot of coffee. If you like weaker, watery coffee, then the carafe is going to make you deliriously happy. I, however, am unimpressed, which is a doubly bad state for me prior to coffee: 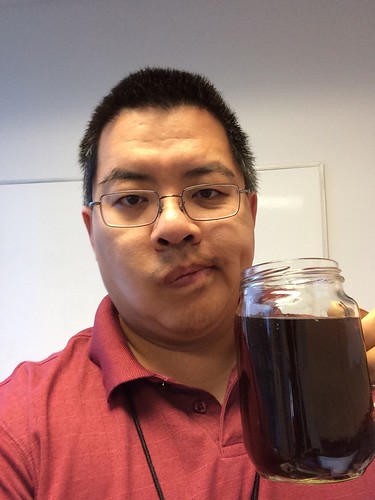 The verdict? If you own a Keurig system already and it’s not broken, there’s no compelling reason to upgrade. Don’t spend the money for DRM that doesn’t benefit you, and a carafe of weak, watery coffee. Stick with the Keurig you already own. If you don’t own a Keurig, the Keurig 2.0 is a capable machine with tradeoffs. If you want to use your own coffee with a reusable filter, you’re out of luck unless you glue a used Keurig label on your K-Cup holder (and I’d recommend an Aeropress for that anyway).

Update: After several months, something has gone wrong with this machine. It now makes a cup of coffee in slightly less than 3 minutes, significantly up from the 30 seconds or so it used to make a cup of coffee. Even after repeated cleaning and such, it’s still working badly, but not badly enough for me to send it back.

As always, thanks to Klout for the Perk and to Keurig for the machine. It’s now available for purchase everywhere. (Amazon affiliate link) I don’t know how much use I’ll get out of it, but at least it’s pleasant looking.

Disclosure: I received this Klout Perk for free. No other compensation was given.