One of the cardinal rules of social media is “be human”, which is general advice suggesting that companies interact with their customers using a human voice and personality, rather than a faceless, monolithic voice of an organization. In theory, it’s the difference between talking to a neighbor and talking to the Borg. 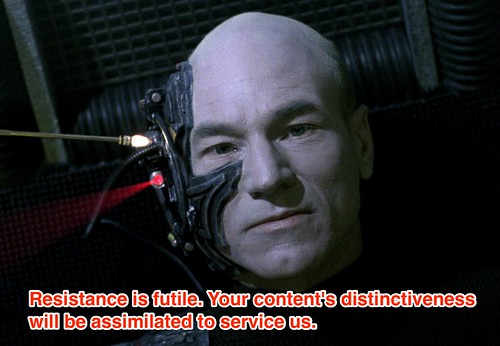 That same advice is unevenly applied to digital marketing, but no place is it more absent than in content marketing. Most content marketing is soulless garbage, gussied up with a pretty infographic (often filled with meaningless data) that accomplishes nothing except prove that content by committee is a disaster in the making.

The content you create should be a reflection of the person who wrote it, and should speak to your audience as if it’s a conversation between two people, because it really is. Rarely have I ever seen a crowd of people read a blog post together. Chances are, you’re not reading this with three other people next to you right now. This is a conversation between the two of us.

1. Decide what you want your company’s brand to inspire in terms of feeling. When people hear from you and the problems you solve, what feelings should they inspire? Mitch Joel loves to cite the Harley Davidson brand, which lets a 43 year old accountant get dressed up in black leather and ride through a town and have everyone be afraid of him. On this blog, I want you to feel smarter just for being here, that sense of excitement that you’ve found an advantage, something other people don’t get. I write so that it sounds like we’re conspiring over a cup of coffee. What feeling do you want to inspire?

2. Speak with a dedicated, focused voice. Your blog or newsletter may have multiple authors working on the content, but put a voice behind it, something that has a particular tone and tenor that matches your company’s brand. If you’ve decided to be professional, then photos of your staff in your newsletter pitch-drunk at the latest company gathering might not fit. If you’ve decided to be casual, then having starched collars and three-piece suit photos wouldn’t fit either. Your voice, your imagery, everything, should reflect what you’ve chosen to be.

3. Pick a persona and use it. This can be an actual member of your staff, or it can be a fictional construct. If you choose the latter, clearly define its personality and how it will behave. This persona should be who your emails are from, and should be a consistent presence in email, on the website, on the blog, and in social media. I’ll say this: this is much, MUCH harder than it sounds, because you need someone to curate and regulate that persona based on very detailed rules. It’s easier to use an actual human being.

4. Be consistent in your content. People love predictable and routine. We humans are creatures of deep habit. Whenever I’m speaking publicly, one of my questions I ask the audience is when Seinfeld was on. More than a decade and a half later, people still remember, because it was valuable content published at a predictable time.

5. Add value and give first. Unless you go to a lot of Tupperware parties, generally speaking, your friends and colleagues don’t try to sell you something all the time. You shouldn’t either. Chances are, your actual friends look to do nice things for you first and unsolicited. Treat your audience as well as you treat your friends, and offer value first in your content.

6. When you do sell, pitch personally. Instead of having the generic press release or standard sell in an email, look at using your persona’s social capital to make a personal pitch every now and again. Think about every form email you’ve ever received and how it looks. Think about every pitchy blog post you’ve ever read. Now think about how your actual friends ask you for help. See if changing formats to ask like you would ask a real friend makes a difference.

These 6 ideas are just the start of transforming your content marketing program from just another ineffective broadcast medium into a true communications channel that delivers value to both you and your audience. Try it today!