What Warcraft teaches us about group vs. individual performance 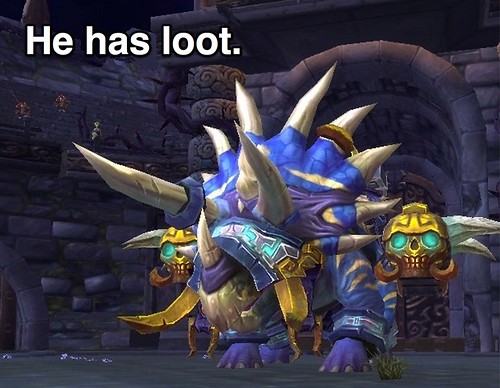 I finally got to and through the first wing of Throne of Thunder on my Worgen hunter recently, the newest raid in World of Warcraft. One of the most challenging parts of this particular set of raids is that the responsibility for the health of your character and her continued survival isn’t left solely to the healers. On many of the fights (Horridon comes to mind), there’s simply too much going on for a team of healers to keep pace and keep everyone topped off, so you have to make tactical decisions on the fly about dealing damage at peak performance and risking being killed, or spending some of your time, attention, and resources to keep yourself alive at the cost of individual performance.

Though the answer might seem obvious (you do zero damage on the boss when you’re dead), a significant number of players inevitably end up very dead because they are unwilling to make the tradeoff between individual and group performance. For some, it’s a matter of ego: they need to try to be at the top of the damage scoreboard to satisfy their need for recognition. For others, it’s a shirking of responsibility or an opportunity to assign blame: healing is the job of the healers only, and if their character dies, it’s the fault of the healers. Blizzard’s design of the raid intentionally forces you to either accept some responsibility for yourself or perish. If you don’t, and if enough people don’t, you wipe and the giant dinosaur gets to dance on your corpses.

This is the trade that Blizzard forces you to realize: at the end of the fight, either the boss is down or you are. It doesn’t matter what the damage meter says if you wipe: everyone gets a repair bill, and no one gets loot. If you take responsibility for yourself, if you help out your healers, if you put the collective goal of a dead boss first, then your individual numbers will be lower but the healers will be able to keep the entire raid operational long enough to outlast the boss, and you get to dance on its corpse and take its shiny loot. The group wins.

There is, of course, a balance as well. If you spend too much time mitigating damage and focusing on overall utility rather than dealing damage, at some point the boss enrages and eats everyone. Everyone has to hit minimum damage dealing numbers in order to kill the boss before time runs out.

The corporate world is surprisingly similar: you have to, at times, switch up what you’re doing for the benefit of the entire team, even if it temporarily reduces your individual performance. For example, in my work at SHIFT Communications, a significant minority of my time is spent teaching, training, and sharing knowledge internally. Doing so reduces my individual productivity, but increases the overall capability of the organization. At the end of the day, my individual performance matters less if the organization as a whole suffers; I’ve worked at companies in the past where star performers led the company right off a cliff.

Once you hit the numbers you need to hit in order to meet the goals and performance expected of you, what do you do next? Do you strive for ever greater personal performance? Do you look to overall team performance? How do you find your own balance between individual and team performance?