What Guild Wars 2 Teaches Us About Rewarding Behavior 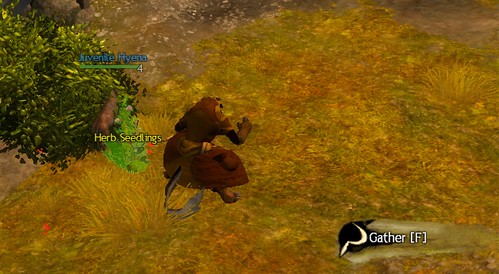 At the behest of friend and fellow gamer someone, I’m trying out Guild Wars 2 (GW2), a game very similar to World of Warcraft. It’s got all the stock, standard tropes of an MMORPG (massively multiplayer online role playing game) with a couple of interesting twists. Unlike traditional MMOs that have defined roles such as tanks, healers, and damage dealers, everyone in GW2 can perform limited aspects of all three roles. Second, and relevant to the topic of this blog post, the game has been engineered to make you more social, rather than less.

For example, in every other MMO, there are resource nodes that your character can harvest, such as ores, herbs, fish, etc. These nodes are typically one-time use, which means that whichever player gets to them first gets to enjoy the harvest, and if you’re second in line, you get nothing except frustration. The nodes in GW2 are duration-based: every player who gets to the node within the time that it’s available gets some goods. That radically changes how you perceive other players. They’re no longer competitors for goods. That in turn changes how we perceive those other players, not as enemies, but as either neutral or even helpful presences. When your goal as a multiplayer game is to increase social cohesion (people stay with games, social networks, etc. when their friends do), not penalizing people for being in the same vicinity as others is a crucial step.

Another interesting feature is that every player has the ability to resurrect another fallen player, regardless of class or skill. You just click and wait for the other player to get on their feet, usually a 5-10 second wait with no cost or materials required. Players who do so are rewarded with a small amount of experience. As a result, it’s not uncommon to see players healing and helping each other out, even if they don’t know each other. It’s a sort of common courtesy in GW2, a social norm, and again, creates opportunities to have more interesting social interactions than in games where players can’t help each other on their feet.

What’s important about GW2 compared to others in its genre isn’t its features. What’s important to us as marketers is that the developers have clearly put a lot of thought into rewarding the behaviors they want to encourage. One of their stated priorities is eliminating game mechanics that make us perceive other players as enemies and competitors rather than comrades and friends. The game does this marvelously, and it makes for a much more cooperative environment. This in turn makes in-game chat more pleasant and makes players behave more socially normal (closer to the real world) than other games I’ve experienced, because the game simply doesn’t have as many ways you can behave badly to others in it.