Be proud to sell something worthwhile

Here’s an unusual quirk I’ve noticed that’s especially strong in the marketing and PR worlds: people don’t like to sell, and they definitely don’t like to think of themselves as sales professionals – even if a majority of their time is spent doing that. We have awkward titles like Business Development Executive or New Business Representative to avoid calling ourselves sales professionals. We prefer to think we’re doing consultations rather than sales calls. 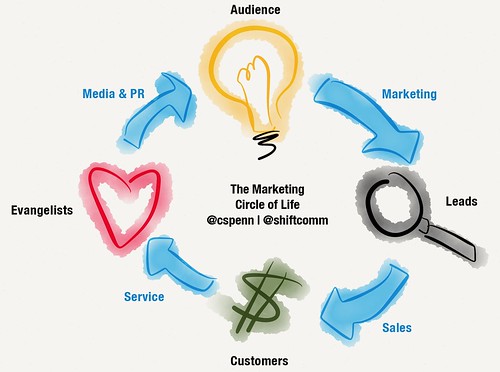 We claim we’re not selling, but if you look at the three part funnel, a marketer generates leads. A sales professional turns the leads into revenue. If any part of your job ends with the bottom line – new customers or new revenue from existing customers – then you’re in sales.

Why do we have such distaste for thinking of ourselves as salespeople? It’s partly because unprofessional, inept, or unethical salespeople have blackened the profession’s name by selling poorly. Sometimes they’re selling features that don’t actually come with the product. Sometimes they’re trying to cram a product down a prospect’s throat because they’re more focused on the sales quota than the customer. Sometimes it’s a lack of skills that makes for uncomfortable presentations that we’ve been on the receiving end of. Whatever the case may be, we don’t generally want to be associated with the profession of sales.

Here’s a head changer. Until about 1000 CE, sell (from the Old English “sellan”, to give) had no financial connotation. It meant to give, to hand over, to deliver. Think about that for a second. If someone sold you something in old times, they were giving it or delivering it to you. It wasn’t until 1000 CE that you gave something in exchange for money. Ask yourself this: when you are performing the selling role today, what are you giving to your customers? What are you delivering? What are you offering first?

If you’re giving them something of legitimate value, something that you believe in (a product, a service, a brand), something that you know will legitimately make their lives or their businesses better, then be proud to sell it. Be proud to be able to gift them with the benefits of what you have to offer and ask for appropriate recompense in return. Be eager to improve your selling skills so that you can get your product or service into the hands of people who need it, who need you, with more skill. I happily and proudly sell the services of my company, Trust Insights on a daily basis, not just for a paycheck, but because I truly believe in and am proud of the company I co-founded and the people I work with. Even at past companies where I might not have been proud of the product or even the company, I was proud of the work I did and the value I delivered to customers, and I sold that.