Facebook’s 2012 teaches us that mobile strategy is mandatory

For those brave souls willing to dig through analyst calls and investor statements, a bounty of interesting tidbits awaits in Facebook’s 2012 financial results. The social networking behemoth clocked in at 5.089 billion in revenue, up substantially from the3.711 billion from 2011. More interesting for us marketers are these few tidbits.

If that doesn’t jump out loudly enough, Mark Zuckerberg had this to say:

“2012 was a big year for us. We made the big transition where now there are more people using Facebook on mobile everyday than on desktop.” 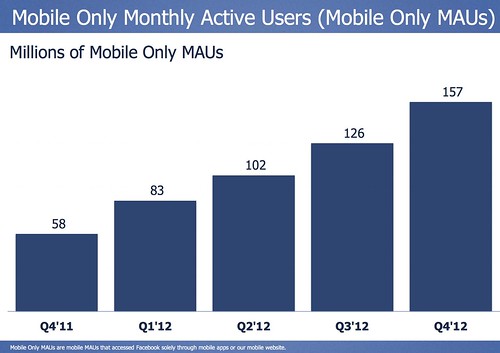 Your site, your properties, your content, your media must be mobile-ready if you interact with the Facebook audience at all. I did a quick look in my own analytics this morning.

All mobile site traffic on my personal website clocked in at 17.35% for Q4 2012. But Facebook-sourced traffic?

23.8%, which is a 37% increase. If I were to do a massive campaign or spend on Facebook, I’d need to know that making it mobile-friendly for that crowd was an imperative. Close to 1 in 4 visitors would be coming from Facebook on a mobile device.