Getting lost at the greatest show on Earth 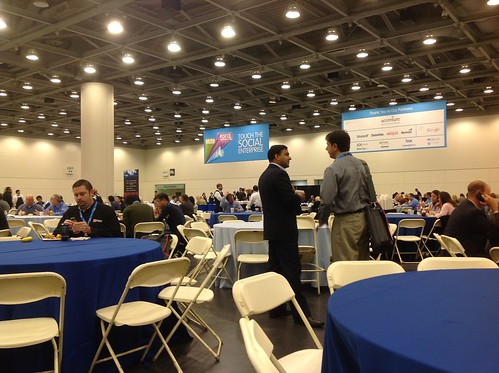 This week, I’m at Dreamforce 2012 out in San Francisco. According to Salesforce.com CEO Marc Benioff, there are 85,600 people on site, thousands more online, and hundreds, if not thousands of vendors and advertisers vying for our attention. There are hundreds of speakers at 730+ sessions to share knowledge.

So the question is, how do you stand out? If you were an advertiser, if you were a marketer responsible for bringing home some bacon from this show, how would you stand out, especially if you didn’t have the budget for a million dollar sponsorship?

What I’ve seen so far is largely an amalgamation of what doesn’t work. This show is very much a “go big or go home” venue – if you do a small or middling sponsorship, you’ll get lost in the crowd. You either have to go all in, or not at all. For example, I’m at this show mainly as a speaker. Yes, I’m representing my company as well, but I’m fully and wholly aware that if we didn’t drop $50K+, we’d get no lasting traction from it.

The other thing is that you have to have your message sharpened and honed like a razor. That’s true all the time, to be sure, but a show like this requires a few extra strokes on the grindstone for the most precise edge possible. You have fractions of a second as a speaker, sponsor, or advertiser to catch someone’s attention and communicate with them a reason why they should talk to you.

Finally, and this is a bit of a rant on booth staff, hire people and train them for the show. I’ve lost count of how many ultra-platinum elite sponsors’ booths I’ve visited that are staffed by people who are there mainly as greeters and eye candy. They know nothing, and their pitch is a total non-started. Here’s an example from yesterday:

“Hello sir, are you looking for software integration?” was the initial pitch. I responded immediately, “Actually, yes. What APIs do you support?” The response was an instant deal-loser: “Umm… I don’t know. I don’t actually work for this company, but let me go find someone who can answer that.” They lost me after that and I never came back.

It’s fine to hire extra staff to bulk up your presence at a show, but make sure even these temporary employees are given at least enough knowledge to be able to answer some reasonable questions. Otherwise, you’re likely turning away more people than you’re keeping.

Getting lost at the greatest show on earth is easy. Getting noticed is much harder.