What marketers can learn from bond spreads

With all of the financial world focused on the LIBOR-gate scandal, now’s a good time to examine the concept of yield spreads. In the world of financial services, a yield spread is effectively the comparison of one investment to another. For example, people often compare the yields between the 90 day Treasury bond and the 90 day LIBOR rate as a measure of the level of risk in the economy, one famously known as the TED spread. 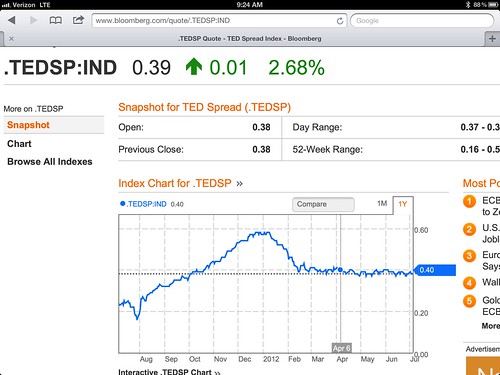 The gap between the rates is the spread; in this particular case, the wider the spread, the more risk there is in the economy. That’s why the LIBOR scandal is such a big deal – banks like Barclays were allegedly systematically manipulating LIBOR to make them appear less risky than they actually were.

So how does this apply to your marketing? Spreads fundamentally indicate a disconnect between two different measurements. In the case of the TED spread, we’re not only concerned about the spread itself, which is a snapshot of risk in the current moment, we’re also concerned about the trend of change between the two. A widening of the TED spread indicates that risk has increased, while a narrowing indicates that risk has decreased.

How does this relate to marketing? Think about all of the different metrics and rates of change data that you have access to, and think about how they relate to each other. In the cases of Treasury bonds and LIBOR, these are rates of borrowing, so they’re different numbers for effectively the same activity. What rates might be similar in function but different and important to your organization?

For example, suppose you have an email subscription box on your website and an ability to buy a product on your website. Are you capable of measuring those rates independently? What’s the spread on those rates, and is it increasing or decreasing? Is there some seasonality or cyclicality to the changes in the spread?

Look for increasing and decreasing spreads in your marketing funnel as well – does your lead generation rate diverge significantly from your closed sales rate? If your business typically generates leads at 8% conversion and sales at 30% conversion, then you have a 2200bps spread. Suppose you noticed that over the past few weeks, that spread had widened to 2600bps. Would that be enough of an early warning signal that you should stop to investigate why the spread is widening? It might be – depending on which number is rising or falling, you could uncover changes that would be worth asking about and investigating.

Spreads aren’t the answer to all of your business marketing metrics, not by a long shot. But as they are in the financial world, they can be an important diagnostic measure that lets you know of potential changes in the system, changes that you can be made aware of very early and react appropriately.