The golden age of Podcasting is now

On the last day of Blogworld, one of the panelists in a “state of podcasting” discussion made this amusing comment while lamenting the lack of growth of his own show: “things aren’t like they were in the golden age of podcasting”. I nearly hit my head laughing at the absurdity of that statement. Take a look at this chart by Tom Webster of Edison Research: 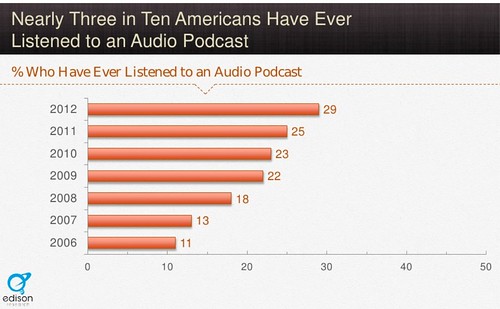 Look at those stats.

In what world do you have 28.6 million MORE customers and the “golden age” of your industry is past to you? Other than a world that’s bad at math, maybe. That growth rate is also astonishing. If only our stock market portfolios had nearly tripled in 6 years.

Podcasting is bigger than ever. It’s more powerful than ever. People are using it differently, as a source of Internet radio on demand rather than a time shifting mechanism. With 3G, 4G, 4G LTE, iPhones and Androids in every pocket, and ubiquitous Internet access, the audience has never been more ready for podcasters.

Here’s the fundamental problem that most independent podcasters have failed to tackle in 6 years: they’ve been squabbling over the same tiny pie of people actively seeking new podcasts to listen to instead of making the pie bigger. In the years since podcasting’s shiny new object status came and went, we’ve seen the rise of social media, the ubiquity of email marketing, the insane power of SEO on all digital ventures, the tidal wave of mobile, and more. Each of these opportunities gave podcasters the chance to grow their audience, to grow their channel, to gain mindshare and market share.

Take a look at how Marketing Over Coffee’s audience on LinkedIn has grown in 3 years: 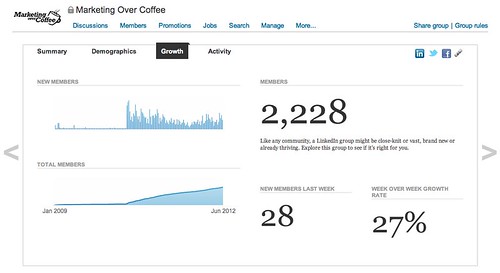 Here’s the bottom line: if you are podcasting, you are a media outlet. You are a publisher. You are competing with every other media outlet out there, from the New York Times to the blogger sitting in the next cubicle, for the same resource we are all competing for: attention. Without attention, we have no audience, and without an audience, we have no business.

If you’re publishing anything for business purposes (as opposed to hobby) – a podcast, a blog, a Twitter stream, etc. – and you’re not advertising your publication, then you will get the same results as any media outlet business that fails to advertise itself: closed doors. Be advertising constantly, via word of mouth, SEO, social media, anything you can get your hands on and that you can afford in terms of resources and you will see your audience grow.

The golden age of podcasting and of all digital marketing and media is now. The golden age is today. You’ve got more available audience than ever before. To paraphrase Toshitsugu Takamatsu, opportunity is sitting there in front of you. Only you can decide whether or not to seize it.