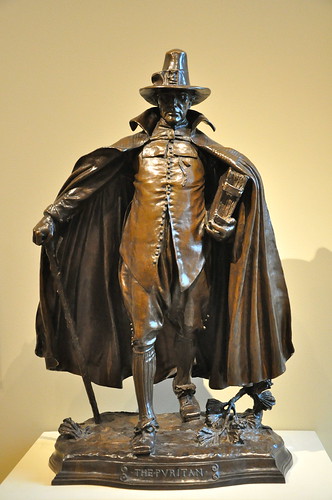 The Puritans have an interesting story, but the defining characteristic of their movement that brought them to North America was a firm belief that what they were doing was of value, even if it separated from orthodox, mainstream thought. Their separation from the Church of England and subsequent exile to other countries including the New World required intense faith just to keep going, especially in the harsh conditions of colonies like Plymouth. That belief eventually led to the earliest foundations of America.

Ask yourself this: how deeply do you believe in what you’re promoting, what you’re marketing, what you’re doing on a day to day basis? Are you just collecting a paycheck and waiting for quitting time, or do you feel compelled to do the work you do because it means something more?

If there was a secret to marketing overall, that would be it – that you have a belief beyond just the paycheck to power your work. That belief, that energy, that feeling is contagious. It turns ordinary blog posts into extraordinary ones, it turns marketing collateral that’s dull into something sincere, it turns your speaking from a rote recitation of the company slogan because you have to into a passionate exhortation that what you’re doing matters.

If you’re not passionate about what you are marketing, the likelihood of you creating awesome, engaging, human content is exceptionally low. Chances are you’ll end up resorting to creating “industry-standard turnkey solutions to leverage synergy and maximize innovative outcomes”. Your audience can tell when you flat out don’t believe in what you’re doing, and when they sense your lack of passion about your products and services, they’ll also choose not to believe in you, and your business will suffer for it.

If you want to build an engaged, interested audience, start by finding something to believe in yourself.