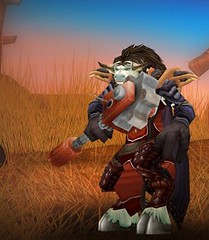 In World of Warcraft, player vs. player combat (PvP) is one of the most engaging, frustrating, and defining aspects of the game. You match up with other players in battlegrounds, arenas, and out in the virtual world, looking to gain honor and rewards for defeating the opposing faction.

One of the greatest advantages a player can have is proper PvP gear loaded with resilience, a property that reduces the damage you take from other players. Players with high resilience gear are extremely difficult to kill. Players with no resilience gear can be crushed relatively easily. Getting resilience gear is something of a catch 22: to get the best gear, you have to play a lot of PvP, but you die an awful lot as you earn that gear.

The other night, I was playing in a battleground on my druid and noticed that one particular member of the opposing faction was fairly easy to kill but was playing their class very effectively, a warrior. This particular warrior wasn’t trying to kill us outright – we were too overgeared for him to do so, and he had relatively little resilience on his gear.

What he did have working for him was knowledge of how his class worked and what abilities that were gear-independent, like stuns, snares, silences, and other forms of crowd control that make life difficult and inconvenient for your enemies. He’d keep a healer silenced and unable to do their job while his better geared buddies would kill the rest of us. He’d do stuns and fears which kept our team out of commission just long enough to achieve their objective.

What does this have to do with marketing? As a marketer, you don’t necessarily need to have the best of the best in gear, equipment, paid services, and ad budget in order to be effective. You do have to know the tools, tactics, and methods you have at your disposal inside and out. If you only have a few dollars in your ad budget, you know how to play them for maximum benefit. You know what social media channels work best for which kinds of content, and as a result, you can dance around competitors that are slower, less agile, less aware, and less effective, even if they have bigger budgets, more staff, better tools, etc. Eventually your proficiency with the tools you have will yield greater rewards, enough that you can play on an even footing with previously better equipped competitors.

How do you become this legendary marketing professional? The same way you become that player in PvP: lots of practice, lots of reading up to see what abilities you have access to, lots of watching videos and studying your competitors and the best-in-class models for how they do things. Copy what they do until you can mimic it effectively, then adapt it until you’ve fine tuned it for how you work best.

May you soundly beat your competitors in the marketing battleground.