Should you opt-out of Klout?

More than a few people have posted recently about opting out of Klout. Here are a couple of pieces that are worth your time to read:

Given some very well thought out pieces about opting out of Klout, should you consider it?

If you’re like Liz and Klout is operating against your principles or ethics, then it’s an unequivocal yes. One of my favorite tenets is by the musician Jewel, who famously said, “No longer lend your strength to that which you wish to be free from”. Depart Klout and don’t look back.

There’s a flipside to not being a part of Klout: anyone and anything using its algorithm is going to exclude you. Why? Here’s what Klout’s API returns when you pull a Twitter user ID that doesn’t exist:

And here’s what the API returns when you pull a Twitter user ID that opted out:

They are identical. When you opt out of Klout, you effectively declare that you no longer exist.

Publicly, that will mean little things like +K votes (and the associated Tweets that come along with them) and exclusion of pointless ads like Klout Perks for body wash and test drives for cars. That’s no big deal, and if that were the only consideration, there’d be no reason NOT to leave.

Privately, however, the Klout API is being used fairly heavily. I can tell you as a developer that I run into “Service too busy” notices more often than I’d like. Klout’s API gives you at the free level 10 calls per second, 10,000 requests per day, which is a tremendous amount, and people are using it. I know I certainly am. How is it being used?

Here’s an email service provider that pulls Klout score into lists so that you can segment your lists by Klout score. If you’ve opted out of Klout, you obviously will show up in the segmentation of unknown user. 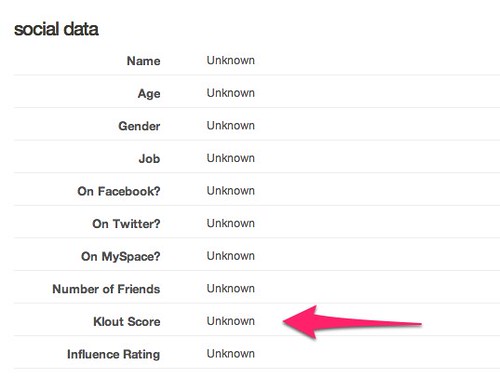 Here’s an integration with Zoho, a small business CRM, to pull in Klout scores:

And here’s one that is probably the most eyebrow-raising of all, a plugin to integrate Klout scores into the Salesforce CRM, the gold standard of large enterprise CRMs:

You may say, rightly so, that you don’t especially care how you show up in someone’s email platform or CRM, or that your other behaviors such as purchase history should matter more. I don’t disagree. I think generally marketers do a lousy job of using the data they already have access to. The caveat with that position is this: right now, marketers and businesses like Klout enough to be using it and integrating it, even if it’s a terrible measure of actual influence.

That means that without a Klout score, you show up to these systems as an unknown user, as a second class citizen (even if you are clearly not, like Liz Strauss).

If a call center has two emails in queue to respond to and an automated customer importance priority system, and one customer has a Klout score of 25 and the other is a zero, your average minimum wage customer service representative isn’t going to care about your ethics or principles. They’re just going to get to you last in the queue because people with scores higher than unknown will be automatically ranked and queued ahead of you.

Here’s the huge problem: neither I nor anyone else except maybe Klout’s IT department have any idea just how many systems are using Klout’s API. Mark W. Schaefer has indicated that in anecdotal data, HR systems are integrating it now.

If Klout doesn’t violate your personal principles, then the safe, conservative choice for now is to leave your account as is. You definitely don’t need to participate with it or give it any mindshare, but removing it outright might have deeper impacts in third party systems than might be overtly apparent at first. Ignoring Klout’s existence it is a safe, no-effort strategy.

For those who did choose to opt-out, there’s this to give you hope: people are using Klout right now because there isn’t a better, more accurate, more insightful measurement. In the absence of good metrics, we often choose to rely on bad ones even knowing they’re bad. There is both incentive and demand for someone to create a better social media influence metric than Klout, so you have that to look forward to.