How to make Pareto curve charts

One of the more useful ways to graphically see the cumulative effects of something happening in your marketing data is the Pareto, or powerlaw chart. Creating these is easier than it sounds. I’ll assume you have access to spreadsheet software. For the purposes of this tutorial, I’ll use the free Google Docs web-based software.

Let’s take a look at a example tweet. Here’s the bit.ly basic clickthrough data for my tweet about the November 5 Leave Your Bank day. 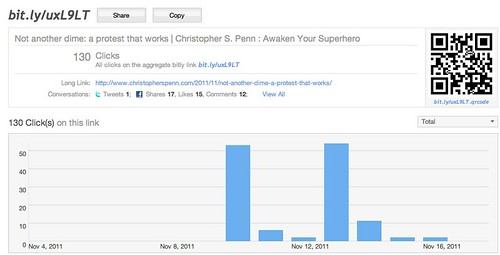 Now let’s head to our sample spreadsheet. You can access it via this public URL.

You’ll want to set up the date, clicks from Bit.ly, the percentage of total, and the cumulative total columns as shown in the sheet. 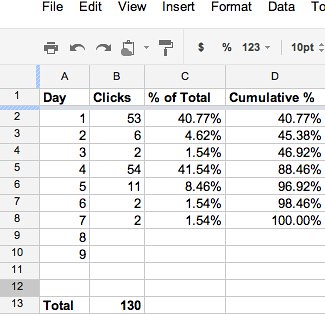 Next, create a chart by however your software creates charts. For Google Docs, choose Insert > Chart. Highlight the first and last columns, make the chart as pretty as you like, and you’ve got yourself a Pareto Chart.

Want to add more than one Tweet? Just start another table and add it into the chart’s ranges.

By the way, does anyone think it’s strange that:

As Tom Webster says, do your own work. In this case, by charting out the clickthrough activity on the 3 most recent blog posts I shared on Twitter, I see that not only is there no best time to tweet for me, but that the real action on a tweet happens long after I publish it, which means that timing of my tweets isn’t nearly as important as some other factor. That means it’s time to go dig deeper into the data and find out why.

I would strongly encourage you to play around with the data you have access to and see what light you can shine on it. There’s a good chance you’ll walk away with more questions than answers, but at least they’ll be better questions, right?