Back from the road

After two weeks of travel, excitement, and learning, I’m back. Before anything else, I’d like to thank all of the guest authors who kept the blog not only going, but with content that was top-notch. If you missed any of the guest posts, please take a few moments to read up on what you missed:

As for the trip itself, it was an amazing, wonderful, and interesting experience. Let’s talk about a few different pieces, then dig into pieces in subsequent posts.

Normally, I hate to fly. Not because being shot across the sky in a giant aluminum tube frightens me, but because flying is such a miserable exercise, thanks to the TSA, cost cutting, and airlines trying to squeeze every last dime out of you. 14 hours in coach across the Pacific Ocean sounds like a recipe for Hell itself. Thankfully, for the trip I decided to go via Korean Air rather than a US carrier, and what an incredible difference that made. Meals that were hot, filling, and actual food instead of various snacks in bags. In-seat entertainment that was better than some of the stuff I had at home. Flight crew that were amazingly attentive and courteous, not to mention hardworking – they literally cleaned the restrooms on the hour, every hour during the trip.

The best part was that all of the amenities (including the slippers, toothbrush, toothpaste, blankets, pillows, wine & beer, etc.) were all bundled into the price, so once I was on board, there was nothing else to pay for. Even the aircraft itself was configured nicely. One non-obvious fact about aircraft is that they are basically large rooms when ordered; the customer (the airline) orders how many seats, restrooms, etc. will be in each aircraft. In the case of Korean Air, all of the seats even in economy had more legroom and room in general than premium legroom seats on domestic US carriers.

If every airline managed to provide the same level of service and quality of experience that Korean Air did, flying would be a joy (minus the TSA) rather than a punishment. Of course, the reason that airlines like Korean Air can provide vastly superior experiences is that they’re flag carriers, which means they are either part of or heavily subsidized by their national governments. The government of South Korea founded and funds Korean Air. Squeezing every last passenger you can possibly fit (and overbooking by 150%) isn’t necessary when you’re paid for by the taxpayers. As a result, all of the little quality of life factors add up to make a much better experience, which means less air rage, which means the staff is inclined to treat you better… which means a better experience, etc. in a nice virtuous circle.

Korea itself was an amazing experience as well. I’ll dig more into it in subsequent writings, but here’s a few fun tidbits:

There’s no diet soda, or very little. Coke Zero is about it. No artificial sweeteners – on the table will be regular sugar, raw sugar, and finely ground sugar, but that’s it. 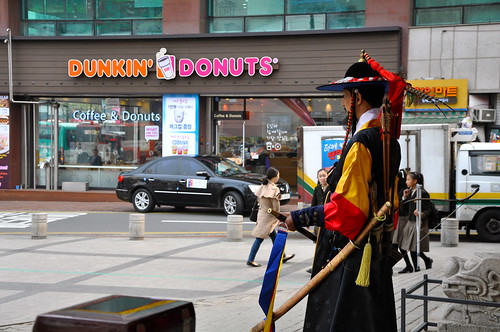 Decaf is practically unheard of. Koreans make up for this by serving a depressingly weak cup of coffee. Speaking of which, there are coffeehouses EVERYWHERE in Seoul. No joke, there are more Starbucks and Dunkin Donuts in Seoul than there are in Boston. The photo above is right outside Deoksugung Palace, one of the five royal palaces where tradition and history meet modern Seoul. I love that a palace guard stands watch over not only the palace grounds, but the local Dunks. 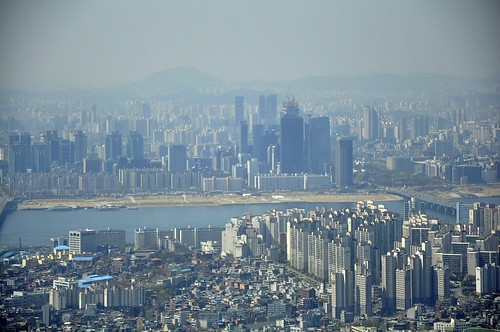 Seoul itself is a gigantic megacity like none other I’ve been to. 26 million people living in one city, more than twice the size of New York. Yet amazingly, almost no litter and no visible homelessness. Granted, I spent a lot of time in the tourist-y areas which should be cleaner than the average city block, but even in New York City in the best areas there’s still plenty of both. 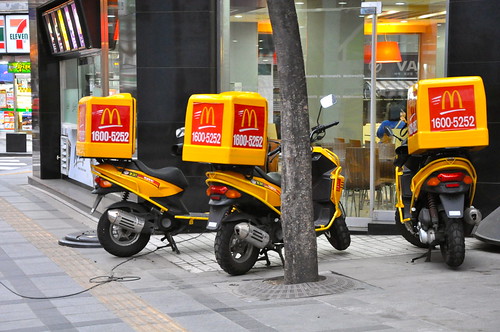 Portion sizes are very small, and the food can be insanely spicy. I had a chuckle at the supermarket after I got back while seeing a headline at the checkout counter – “ASIAN SECRET TO GETTING THIN”. Really simple: portion sizes are probably 30% of what’s served on a plate in America. Our appetizers are the size of Korean entrees. If you cut 70% of the food you ate and made the rest ridiculously spicy (so as to avoid eating too fast), you’d be thinner too.

QR codes are EVERYWHERE. From coffee cups to store shelves, there isn’t a place without a pile of QR codes.

Gasoline is about $8-9/gallon.

If you’d like to see the rest of the photos from the trip, you’ll find them here.

More to come in the days ahead, but I’ve got a massive inbox to clean now, so we’ll talk a bit later.