We love the crispy crunch that fried foods have, don’t we? We also do not love all the calories, fat, and other unpleasant stuff that comes with fried foods, right? Here’s a crispy quesadilla secret that can transform nearly any sandwich into a crisp, golden, delicious wonder with virtually no extra fat, gobs of oil or butter, or other stuff that you’d prefer not to eat all the time. Here’s a way to get the crispy crunch without the oily punch. 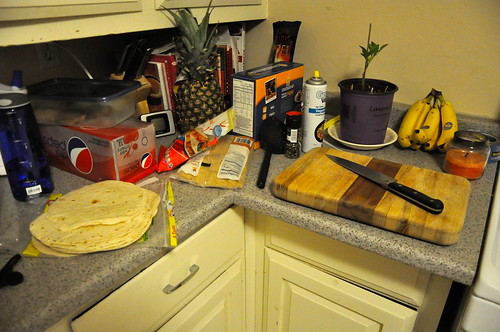 Start with your average store-bought tortillas, whatever will fit comfortably in your non-stick frying pan. Grab some decent shredded cheese. Have a cutting board, large knife, clean towels, plate, frying pan, cooking spray, and spatula handy. If you have other pre-cooked ingredients you normally put in quesadillas (onions, shredded chicken, etc.), have that all ready as well. Put a towel down on the cutting board and have the knife nearby. Put another towel on the plate. Mise en place, or everything laid out in advance, is vitally important to making this work well, so make sure all supplies are ready. 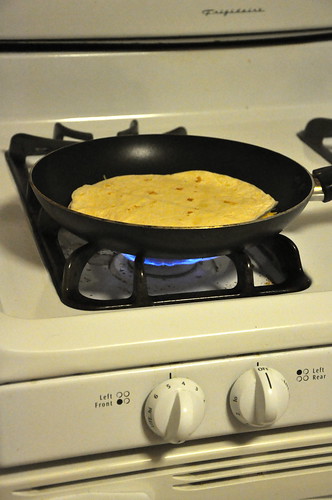 Spray the pan lightly with the non-stick spray. If your pan is not non-stick, spray not so lightly. Turn on the heat to medium-high; on a scale of 1-10, it should be around a 7. If you have one of those weird stoves like I do where the burner knobs are numbered 1-6, go for about 4 1/2. Put down a tortilla, grab a handful of shredded cheese and spread it out quickly and evenly over it, quickly put in any other fillings you like,then cover with another tortilla. 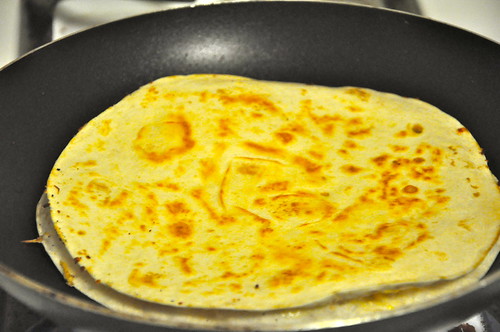 Cook the quesadilla like this for about a minute, shaking every so often. Flip it over at the minute mark and check to see if it’s lightly browned. With quesadillas and sandwiches, it’s okay to pick them up and check them more frequently than, say, eggs. Dark brown or burned means your pan is too hot. Unchanged in color means your pan isn’t hot enough. Cook both sides until they’re lightly browned. 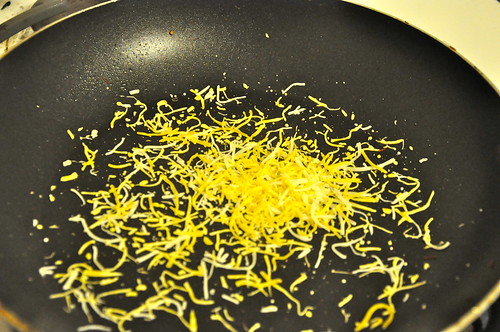 Now here’s the secret. Grab a smaller handful of cheese and sprinkle it very quickly and evenly around the pan itself. You don’t need much – just enough to add a little cheese all around. Put the quesadilla on top of this cheese and cook it for 15 seconds or so, shaking frequently. 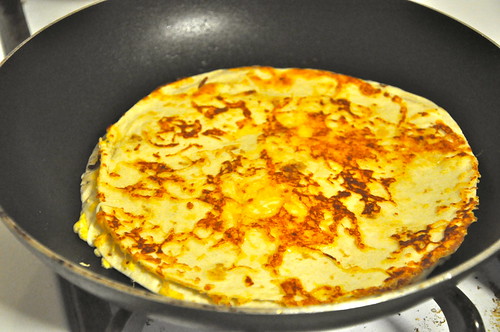 If you do it right, the cheese should turn a medium brown to golden brown crust on the outside of the quesadilla. Lift it out of the pan, put down another handful, and cook the other side the same way for about 15 seconds or until the cheese looks like the picture above. 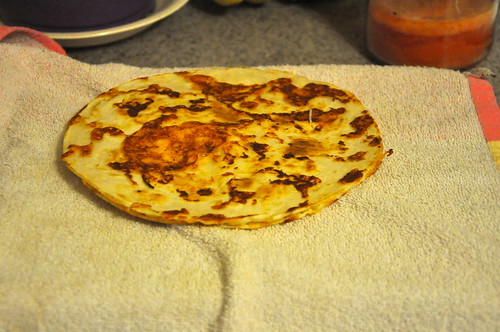 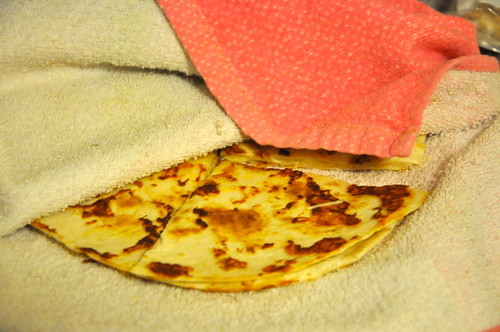 You now have quesadillas that are covered in a golden, crispy cheese crust that, depending on the cheese you use, is likely to be much healthier and more nutritious than a batter-fried food. It delivers wonderful flavor and crunch without the bad stuff that comes along with deep fried foods. The best part? This dish is dirt cheap to make. You can plate up 5 full quesadillas or 20 wedges for about $5, depending on how inexpensive tortillas and cheese are near you.

Take the cheese crust idea to things like tuna sandwiches and other dishes where you want crispy but not oily. You’ll be amazed at how you can make crispy and delicious without oil and grease.