For those who enjoy but occasionally miss tempests in teapots, Kenneth Cole tweeted this out yesterday:

The reaction was swift and merciless inside the social media fishbowl:

So how much of a difference did a massive amount of outrage make to the people who are responsible for running Kenneth Cole? None. How do we know this? Check out their stock price: 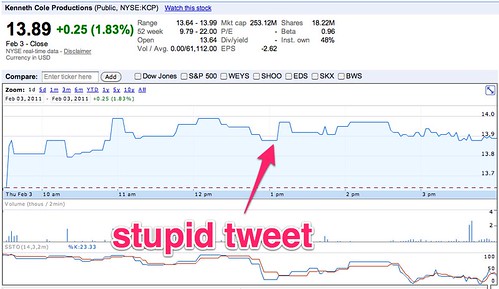 The stock finished neutral for the day from tweet to market close. The shareholders of the stock are the driving force behind any publicly traded corporation. They influence the board of directors (who are usually the largest shareholders as well) who in turn hire, fire, and otherwise oversee the operation of the company’s management.

If the tempest in the teapot had made any substantial difference, you might have seen increased volume in the stock and even a small hit to the share price as worried stockholders would have dumped it in fear of reduced revenues. Instead, the firestorm appears to have had no discernible impact on shareholders – volume actually dropped  and the share price held steady, which means the PR gaffe will largely be forgotten as soon as the next shiny object comes along.

If you were legitimately upset by Kenneth Cole’s actions as a person and as a company, did you do any of the following?

If not, then you didn’t exert any influence over the folks in charge of Kenneth Cole.

There’s an expression from musician Jewel that I love dearly:

No longer lend your strength to that which you wish to be free from.

When it comes to companies, politicians, and anyone behaving badly, there’s a good chance that in America and most other capitalist nations that money is the foundation of strength for many organizations, right or wrong. If you want to make real change, if you want to exert real influence, you have to understand the financial angle behind the scenes that enables or disables an organization to take action.

This leads to a petition operated by a political action group. Petitions are fine and good for demonstrating that a lot of people want to say something for or against a position, but at the end of the day, if the politician who sponsored the legislation feels no impact, the petition is largely meaningless except to help people feel better. If you were for or against this legislation, did you do any of the following?

The uncomfortable truth is that protests of any kind online are largely insubstantial if they’re not accompanied by some form of tangible action, and material or financial support for or against something is the most expedient way to ensure that your voice has a little more leverage. While it may make us feel good to sign a petition or press the Like button or the Retweet button, we don’t change anything. Only when we have some skin in the game, some resources on the table, are we going to start moving the needle as rapidly as we want.

Next time something stirs you up, take a moment to step back and ask how you can leverage the influence you have to not only say something, but to take tangible action, to no longer lend your strength and resources to things you wish to be free from.

Full disclosure: I do not own any position in the KCP stock.

Final note: please do not comment on the individual issues raised in this post. Other places are doing a fine job of debating the merits of the above current events. Focus comments instead on the process of taking action that matters and putting resources in the game. Comments about the specific issues will be deleted.