What Alterac Valley can teach you about SEO & marketing

Over the weekend, I had the delight of competing relentlessly in Alterac Valley, a 40 man player vs. player battleground in World of Warcraft. For those unfamiliar, Alterac Valley is a large, mountainous battlefield that is a war of attrition, trying to gather resources for your team and deny objectives to the opposing team. 40 players from each team rush out to manage 23 separate objectives. 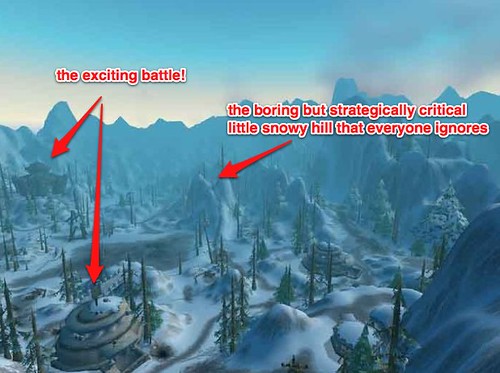 However, just 2 people out of the 40 can make a difference that can prevent a turtle and advance your side towards winning, by controlling a small, boring objective on top of a hill that most players on both teams ignore. (Snowfall Graveyard, for the WoW PvP crowd) My little 2-man squad from my guild always captured this little objective and then stood around to guard it against recapture. 99% of the time, we were bored out of our minds, save for when 1 or 2 opposing team players wandered by. Yet by holding this little objective, we prevented the turtle because holding it allowed our team to reappear behind enemy offensive lines, a significant strategic advantage that changed the momentum of battle in our favor.

Why do the vast majority of players ignore this little snowy hill? It’s boring, for one. If you’re playing for the glory, it’s about as far from glory as you can get: it’s guard duty. Most players with very short attention spans simply gloss over it. Second, most players don’t understand strategy and just rush in to kill whatever they can and hope they live long enough to win. Finally, standing guard there and watching your team members run by repeatedly reinforces that you’re not in the action or the heat of the battle, which drives most players batty. Impatience and bloodlust demand they be in the heat of the battle, not standing on a hill watching. Most players are unwilling to forego their own fun and enjoyment for the benefit of the entire team.

What does any of this have to do with you? Take a look at your organization and how you expend your resources. What strategic objectives are easy but incredibly boring, yet might swing the tide of battle or the momentum of your organization wildly in your favor? Are you overlooking them because they’re boring and completely without glory?

One that comes to mind is SEO. Search engine optimization is, to be perfectly frank, boring work. It’s unglamorous, it’s repetitive, it’s almost mindless at times. Yet even one person with the right skills can “take the objective” of SEO and dramatically affect a company’s growth. As your sales and marketing teams rush by in their quest for glory with social media, social sales, and the shiny object of the day, it’s human nature to want to follow them, to be in the spotlight, yet if you stand guard at your little snowy hill of SEO, you might have an outsized impact on all your marketing.

What snowy hills are you passing by that instead you should be taking and holding, even when no one else wants to?

p.s. For those veteran WoW PvP players, yes, Iceblood Graveyard is strategically better but because it’s right in the running path of the Horde, it gets lost far more than held with a token force. Snowfall is far easier to hold because no one cares about it.