I’ve been coding in some PHP (badly, as usual) recently to interface with the controversial Twitter scoring service, Klout. For those who haven’t followed along, Klout assigns a score to Twitter users based on their perceived influence by a huge number of scoring factors. They recently updated their algorithm to run daily and score a little differently.

While a high Klout score may or may not indicate influence, the most interesting thing I’ve found and the most useful thing I’ve found is that Klout is REALLY good at identifying crap. Spambots, auto-bot accounts, accounts of nearly zero value – Klout can help you weed those out very quickly. If you’ve got a list of Twitter handles, Klout scores can show you what the back alley, red light district handles are and you can either remove them from influencer campaigns you’re running or remove them from your network if you’re so inclined.

Take a look at this sample of Twitter handles and the corresponding Klout score. There are no scores below 10; accounts that Klout doesn’t have data for do not return a score. The data source for this comes from people who follow me, so there is unquestionably some bias to the data. I suppose I could do a pure random sample, but that’s best left to experts like Tom Webster. If you would like a copy of the raw data (sans Twitter handles, but just go see who follows @cspenn), you can download the CSV file here. 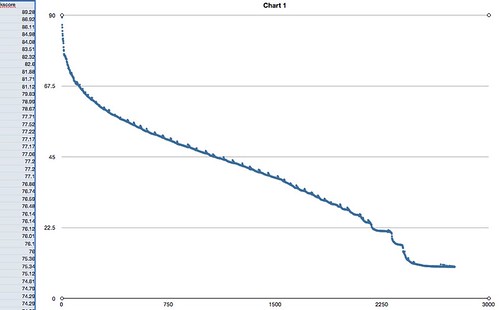 Interesting, isn’t it? You see a normal powerlaw curve right until about a Klout score of 25 or so and then things start looking very strange when scores dip below 25. If you start digging into Klout scores below 25, you tend to start seeing a lot of accounts on Twitter that are almost certainly bots. They behave like bots, posting random quotes, being full of nothing but “New Blog Post: https://iamfartoolazytocreategoodcontent.com/?p=123573”, or purely mechanical retweets. When you get to scores below 15, things get really ugly. Accounts with 1 tweet, accounts with 1 follower and follows 1, all sorts of stuff that won’t move the needle at all for you.

Now before you go racing off to declare that anyone with a score below 25 isn’t influential, I’d like to say that this is not the world’s best research. I’m using a data pool that has a bias to it and I’m almost certainly not doing best research practices. A score below 25 may indeed mean that someone is just trying to figure out Twitter. That said, I think there’s strong potential for Klout scores to be used, if not for identifying influencers and A-List folks, to at least identify people who you might not want to spend a tremendous amount of time on, sort of a minimum barrier to entry.

By no means should this be the be-all-end-all metric, so file it under a hint of things to come – but there’s value here developing.