Over the past weekend, the weekly battleground in World of Warcraft was Eye of the Storm. For those who don’t play, Eye of the Storm is a lot like capture the flag games from your childhood. Your team, which is randomly assembled from all the people who want to play, has to capture up to 4 bases and then bring a flag from the center of the battlefield to a friendly base. Imagine a baseball diamond with a flag on the pitcher’s mound and you get the general idea. You do this until your team reaches a certain number of points, then you win. 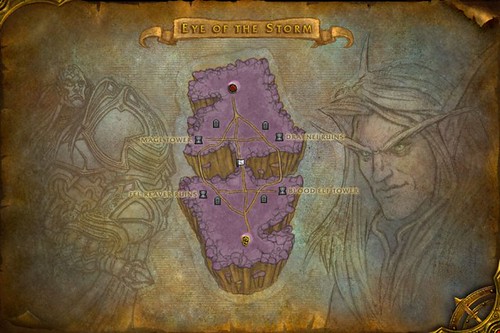 As with all other battlegrounds in World of Warcraft, there are no guides, hints, or clues as to what you’re supposed to do once you’re on the playing field. The battle starts and the game is on. What happens next is entirely up to the players.

One of the things I’ve noticed about Eye of the Storm more than other battlegrounds is that very often, there’s no clear agreement even among veteran players as to what strategy the team should use. Should you capture as many bases as possible first to start accruing points? Should you capture just one and go after the flag right away?

What ends up happening in successful games is that someone shouts out a very clear, detailed strategy from the very beginning, reiterates it, and as soon as the game starts, the team (who have largely never met each other before) goes out and does it with frequent reminders. Here’s the thing: the strategy very often isn’t a good one. It’s a mediocre strategy at best if you read all of the theorycrafting blogs about Eye of the Storm on the Web.

Here’s why mediocre strategy tends to win: the first couple of minutes in a battleground set the momentum, tone, and rhythm of the battle. For the most part, both teams on the field have been assembled randomly. Having a strategy as soon as the game starts, even a deeply imperfect one, gets everyone organized and quickly working towards goals while the other team figures out what they want to do.

Does this sound familiar? It should. In marketing, in business, in competition we are often faced with situations exactly like this, over and over again. A new niche in an industry opens up, and the winner more often than not is one that can take a strategy of moderate quality and execute on it early and flawlessly while everyone else tries to figure out what to do. It takes significant resources and effort to overcome that early advantage, to change momentum in a different direction.

Take this lesson away if nothing else: your strategy doesn’t ever have to be perfect, only your relentless execution of it. Do this as much as you can and not only will your team win Eye of the Storm more often, but your business may flourish because of it, too.