PodCamp Boston 5: Prepared for the future 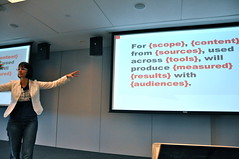 PodCamp Boston 5 has come and gone, celebrating 5 years of what started as a goofy little experiment and turned into a worldwide movement. Chris Brogan and I have you to thank for taking our idea and running with it, and we hope you continue to do so. I’ll let Chris expound on his takeaways from the event, but here are a few of mine and some thanks.

First, a gigantic thanks to this year’s organizing team: Doug Haslam, Ellen Rossano, Carissa O’Brien, Steve Sherlock, Chris Brogan, Chris Bowen, and especially to lead organizer someone. These folks did an amazing job, and everything you saw and experienced this weekend happened principally because of them.

Finally, thanks are owed to everyone who learned, shared, and grew their new media skills.

The theme of this year’s PodCamp Boston was preparing for the future, and I think a good part of the content fit that theme very well. We all shared things from basic social CRM to mosaic branding, from blogging 101 to competitive intelligence practices. There wasn’t a lot of waxing rhapsodic about social media’s effervescent qualities or actionless dreaming about quitting your day job, but instead there were plenty of takeaways, even for PodCamp veterans like me. I’ve got a nice list of things I need to check out and learn more about, and to be perfectly honest, that hasn’t happened at a PodCamp or any conference in quite some time.

As I mentioned at the kickoff and during my podcasting session, it’s time for folks to re-look at podcasting. It was 5 years too early and most of the folks who burned out and left have missed the opportunity. The research done by firms like Edison Research point to huge potential in an audience that very few people are serving. Don’t get me wrong – this isn’t the hype of the early days of podcasting. It’s still much harder work than nearly any form of new media except video production, it still requires a ton of commitment and passion, but the audience you have access to now, 5 years after PodCamp 1, is gargantuan compared to the audience we had back then.

Podcasting is an incredibly poor vehicle for the casual prospect, for the casual browsing sort. Tools and platforms like Twitter or quick hits on YouTube are much better suited for low-commitment, short attention span crowds. Podcasting is an ideal vehicle for the highly engaged, highly committed customer or prospect because these are the folks who will make room in their day, their workout routine, their commute for you because they love you and everything you produce. There will not be many of them compared to audiences like Twitter followers, but they will follow you to the ends of the earth as long as you continue to serve them well.

Finally, the preparation for the future is ongoing. Everyone who attended PodCamp got to expand their personal power and reach, expand their knowledge, expand their networks, and these are good, important first steps. Keep doing them, keep growing, but start to leverage that power. Start to use your awakened superhero powers to make something happen in the world. Take what you’ve learned and apply it. If you have no opportunity to do so at work, find a local charity and volunteer to start them down that road.

To everyone who has been a part of the PodCamp adventure since that fateful weekend at Bunker Hill Community College 5 years ago, thank you for being a part of the adventure, and thank you for continuing to make the world a better place in all you do. I hope that PodCamp continues to help you in your quest!