Deflation, destruction of credit, and the Lich King

Yep, another economics crossover. Blizzard Entertainment’s Wrath of the Lich King expansion pack for World of Warcraft dropped last week, and its impact on the economy has been fascinating. Veteran players of the Auction House (the in-game free market) have been finding that since the expansion came out, very little has been selling. The reason, however, is not because the most advanced players in the game are in a new part of the game. The reason is likely because the most advanced players (and the wealthiest, or at least those with greatest access to capital) are running out of money.

If you’ve never played World of Warcraft, it’s a virtual reality game, an online role playing game in which you are an adventurer beating up other people or game-generated opponents. Part of the game is buying and selling equipment to make your character better, more effective. Whenever you defeat a creature in the game, you typically get a small reward of some kind, plus some experience points which contribute towards making your character better. Once you hit the maximum level of experience points, money is substituted for experience points. For a long time, since the last expansion pack, top players have been generating hundreds of gold (the in-game currency) a day, and pouring that money into the virtual economy.

Here’s where the expansion pack changed the economy. The expansion pack now allows top players to earn more experience points, up to a new cap. Because they’re fighting stronger, better opponents, their equipment repair bills (yes, you can’t escape bills, even in virtual reality) have increased, but more importantly, there’s not generating capital any longer – they’re generating new experience points to reach a new maximum level. On top of that, a new class of character was introduced, and experienced players have been trying to build up those characters as fast as possible, again taking a lot of money and earning potential out of the virtual economy.

Think about that for a second. Your top sources of capital in an economy have dried up, while expenditures of capital have increased.

You have, in other words, deflation. Deflation, economically speaking, is when the amount of money in an economy decreases with respect to goods and services in the economy. A dollar (or gold, or whatever measure of currency) is worth more tomorrow than it is today, because there’s just less money available. Deflation brings prices down, but that means it also brings wages down, too. Consumers lose spending power. Demand for items drops because there’s just less money to buy things with. 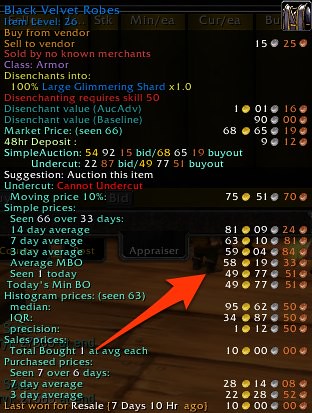 As a result, economic activity slows down. Supply outstrips demand. Items in the Auction House are still being listed, but buyers are getting harder to find. If you look at the moving averages of prices, you also see that prices are falling – exactly what you’d expect in a deflation. This is a double whammy for sellers trying to move goods in the Auction House – fewer buyers and falling prices.

This is exactly the situation that the real economy, especially real estate, finds itself in. You have an absence of buyers complicated by falling sale prices due to foreclosures and lack of demand. Because housing has been a disproportionate amount of economic activity over the past 5 years, the collapse of the housing market has in turn spread malaise to the rest of the economy.

This is also why inflation isn’t a concern right now. Governments of the world have been printing money like crazy recently, borrowing against future taxpayer earnings, or just outright inflating their currencies. However, inflation isn’t a concern because capital – money, in the form of credit – is being destroyed faster than the governments are creating it, as investments go bad over and over again. Without the capital generators of top players in a virtual game or an engine of growth in the real game of life, money is being used up faster than it’s being generated.

How will things change? Well, in Warcraft, those top players will again in the near future hit their maximum levels of experience, and will once again return to income generation. As that happens, capital will return to the markets and you’ll see sales and buying rise again. It may take some time to get there, as reaching maximum experience does take time and effort, but it will happen. In Warcraft, at least, the engines of the economy – top players – can be counted on to bring new influxes of currency to the world.

What should you be doing? Both in the game and in real life, in a deflation, preservation of capital is essential, in the form of saving money, reducing expenditures. Both in the game and in real life, if you have a capital base, you should be looking for very cheap opportunities for investment and growth, and spending the money you do have very selectively, looking to pick up serous bargains. If a dollar is worth more tomorrow than it is today, then it makes sense to hold onto those dollars, to not spend beyond necessities, and to find new opportunities for growth. Find that next economic engine, be very picky about where you spend your money, and keep your eyes open.