World of Warcraft is the new MBA

One of the great takeaway quotes from Chris Brogan at the MarketingProfs Digital Marketing Mixer was that World of Warcraft is the new golf course. There are anywhere between 10-15 million people in World of Warcraft, including me, and there are millions of people logged on all the time. If you’ve never played, World of Warcraft has its ancestry in Dungeons & Dragons and any number of role playing games, only writ large, on a global scale.

Chris Brogan mentioned that World of Warcraft is the new golf course, in that up and coming leaders, executives, and influencers may go into a virtual world to relax rather than hit the greens. Certainly, with tens of millions of players, there are undoubtedly CEOs, CFOs, product managers, and titles of all kinds in the game, just as there are high school kids and even grade school kids in the game.

I think in some ways, Chris doesn’t take the analogy far enough. World of Warcraft has the potential to almost be an MBA of sorts – not really, not in the sense of a formal business education, but certainly, to be among the top players in the game, you have to master certain skills which are equally valuable in the real world. 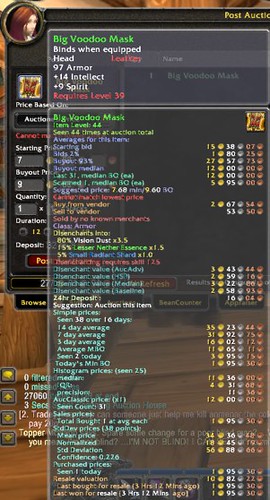 Think it’s just a game? When you look at what highly skilled Auction House players use for analytics, you see terms like 7 day moving averages, interquartile ranges, median buyouts, bid ranges, and much more – terms and language you’re just as likely to find on Google Finance.

How many top traders in the game, making thousands of gold a day, could flip a mental switch and be doing the same on eTrade or working for JP Morgan Chase? True, market dynamics in the real world economy are more complex than in the game – there’s no buying on margin, for example – but the behavior of people is the same whether in game or in real life. An Auction House master trader might very well be the next great hire at Goldman Sachs or JP Morgan, if only both parties knew how easily the skill sets translate.

Leadership and management skills abound as well. In the game, you have guilds, essentially loose collections of players working together for common aims, be they social or game-related objectives. To be a top guild manager requires leadership, charisma, political acumen, and effective management of resources – much like a CEO. Your guild may only exist in a game world, but the human beings who are members are very much real, subject to the same emotional frailties that employees in any corporation are subject to.

There are other kinds of leaders as well. Raid leaders coordinate player teams through challenging instances – dungeons or other battlegrounds – to achieve fame, rare items, or wealth. Highly successful raid leaders amass enormous resources for their teams. Here’s the interesting part. The raid teams can be up to 25 people. Coordinating a team of 25 people towards a single objective in adverse circumstances requires the ability to not only lead, but also to be flexible, to adapt, to manage others in highly challenging circumstances.

What are the skills you value in your company, on your team, in your workplace or group? Where in virtual worlds like World of Warcraft might you find those same skills being applied, even mastered? I’m not saying that your job interview process should include a raid team through Karazhan, but if in an interview a candidate discloses that they’re a level 70 Horde guild leader, you might know a bit more about what skills they might have developed unknowingly.

Here’s some real food for thought: the guild I belong to is run by a level 70 Warlock who is building the guild out nicely, adding new players in specific roles, taking on daily fundraising tasks and managing guild operations. I’m the guild’s economist, managing guild bank items and auctions to raise money for the guild’s operations. Our guild leaders routinely guide newer, less experienced members through difficult parts of the game, explaining game dynamics and providing great leadership skills. Other guild members are developing their roles as well. If my guild’s leader were ever to show up at the Student Loan Network looking for a job, I’d seriously consider hiring her based just on her performance as a guild leader – and I’d know which jobs she doe and does not have the temperament for based on how she handles different situations in the game.

What’s the real world persona of this capable team leader? A 16 year old girl in Southern California. Imagine just how much talent is being grown and developed out there in virtual worlds, where age and race discrimination are nearly impossible, where someone with skills and experience can truly grow, unhindered by our real life prejudices and beliefs, public or private, lock them out of opportunities.

Where is tomorrow’s talent for your organization growing today?