You Ask, I Answer: Google Analytics 4 and LGBTQ+ Demographic Data? 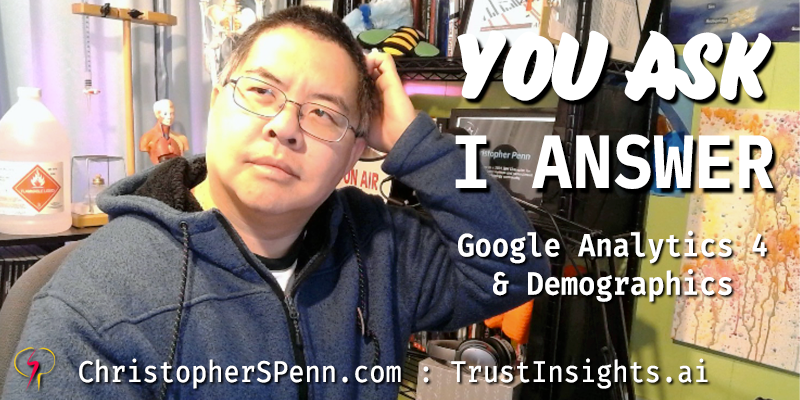 Stasia asks, “In Google Analytics 4, how do you configure demographic data for LGBTQ+ friendly things like non-binary genders?”

You Ask, I Answer: Google Analytics 4 and LGBTQ+ Demographic Data?
Watch this video on YouTube.

In today’s episode Stasi asks, in Google Analytics 4, how do you configure demographic data for LGBTQ plus friendly things like non binary genders? You can’t, unfortunately.

And the ad tech world is a little behind in terms of supporting things like non binary genders, which is fine.

If you identify as either SIS or trans male or female, you get bucketed in the correct category is for anybody who doesn’t fit in those two buckets.

There’s there is no accommodation for it.

Which means that because it’s not in the ad, tech side of things is not in Google Analytics 4.

And until it becomes available on the ad tech side of the house, it will not be available in Google Analytics 4.

So given that, how do you accommodate for this? Well, the easiest way to do that is to collect information directly from your visitors from you users.

If you have the ability for someone to log in, and fill out a profile, then you can ask, obviously, things like age and gender, and whatever other identifying characteristics that you want.

And that will be tied to their their login.

Now, will that be the same amount of coverage that you get out of, say, Google Analytics 4, the default? No, absolutely not.

It’s not the same amount of coverage.

But at the same time, if you’ve done a good job of building a relationship, and establishing and strengthening that relationship with your users, you may get more information out of them, then Google can out of its other users, because the way it pulls together that third party data is from all the other sites in the Double Click Network.

And the data that’s available to them so somebody on I don’t know, CNN, and CNN has some demographic data available.

It’s only as good as the trust in the audience that you get from the people who visit CNN or Fox News or, you know, whatever web properties that are enrolled in the double click for publishers program.

That’s the data that goes into double click, could Google implement, for example, multiple genders? Yes, they could.

But the question then would be, how good would that data be because Google itself does not generate that data, it pulls it from all the individual publishers.

So if you’re on sports, illustrated ESPN, and if ESPN is not gathering that data and is not accommodated for, you know, non binary genders, then the data simply won’t be there.

So your best bet is to do the profiling yourself.

That’s the time to ask for that information.

And then what you’d want to do is start building models.

Based on that if if gender is you think a critically important factor for things like lead quality for your organization, if you think that it matters, you’d want to establish that.

So you’d build a way to gather that data for identified records, then you’d say, Okay, here’s our business outcome, like, purchases, or whatever.

And then you have all the data that you have about your leads, including gender, and you would run it through some kind of multiple regression analysis to say, does gender have any identifiable impact on the outcome, for example, are people who identify as non binary you know, likely to purchase more or more often than people who identify as traditionally male or female, if it turns out that gender is not a contributing factor, then you can safely a ignore it going forward? B, you might want to stop collecting it because it is personally identifiable information, which is radioactive.

And C, you won’t have to worry terribly much about the data you get in Google Analytics 4, because you’ve established that gender in this example, is not a driver of the outcomes that you care about.

So that’s how I would recommend doing the workaround, knowing that you’re probably not going to get non binary genders in Ad Tech Data anytime soon.

They’re pretty far behind the times too.