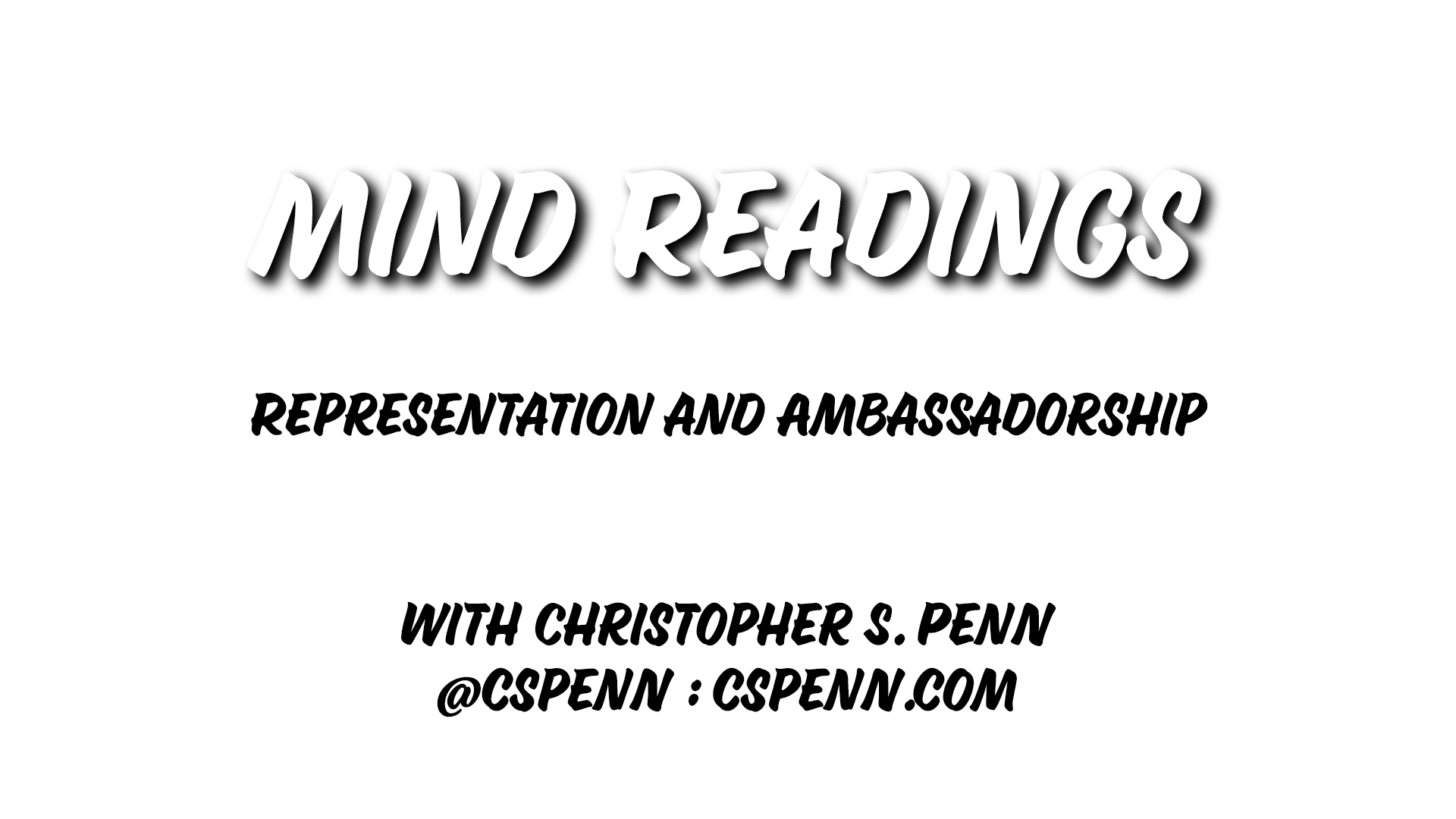 In today’s Mind Readings, some thoughts about the flip side of representation. As a member of a minority, you are an ambassador to the general population for your subgroup, so give some thought to how you convey that.

Mind Readings: Representation and Ambassadorship
Watch this video on YouTube.

And that is that representation ambassadorship aren’t two sides of the same coin.

What does that mean? In the context of content creation and media representation is all about willfully, including people who are minorities, in what media you produce, so that similar groups of people can see themselves and feel represented in their media.

So real simple example on TV shows you if you have a cast of people who are all one, ethnicity, or religion or gender, it’s very hard for somebody else, who is not in that group, to see themselves in that place.

Right to see that they are valued by the society they’re in.

And that they could do that too.

I remember one of the things that was such a powerful statement back in 2008, here in the United States, when Barack Obama was elected to the presidency, was for black Americans to be able to say, there’s a person who looks like us.

And that automatically tells us that we could do that too.

It’s a, it’s a mixed bag of everybody.

But in doing so, people who are in those communities can watch that show and go, that person, that character looks like me sounds like me.

And it increases the affinity that an audience member has for that piece of media because they see someone who represents them.

And everybody is a minority, at some point in some way.

Obviously, some circumstances are more permanent than other so if you live in a nation where the majority of people are saying Korean, like in Korea, and you’re not Korean, it’s gonna be you’re gonna feel like the the odd one out a lot.

On the other hand, if you’re in a place that’s wildly diverse, you will occasionally been in minority positions, but not often.

So what does this have to do with ambassadorship? What is that when you are in a minority, temporarily or permanently you have an implicit obligation to represent it well.

Even if you don’t want to write, you are automatically representing whatever subgroup you are part of.

So for example, when I am out and about, you know, on on stage or at conferences, or you know, even just in the workplace.

If you don’t have any friends, who are ethnically Korean, as I am, I will be the first Korean you meet.

Right? I’ll be the first Korean person of Korean heritage that you know.

And that in turn means that a big portion of your mental blueprint of whether you like this subgroup or not, is going to be patterned in part on the way we interact, right.

So if I act like a jerk to you, right or wrong, you’re gonna say, Gosh, Koreans are kind of must be kind of jerks like this guy, Chris is a jerk.

And so for me as somebody who is in a minority in in the United States of America, obviously not in Korea.

I have an obligation to represent to be an ambassador for my group.

Right as something that I have to be aware of in how I conduct myself how I talk about my, my race, my ethnicity,

even little things like making sure I spell the names of recipes, correct when I put them on Instagram and stuff.

All of that is part of representing my group.

Well, so if you are say you’re gay, right, and you are in a population of people or circle of friends, where nobody else is gay, except you.

People will make assumptions and build mental models, based in part on their experiences with you.

Now, there was obviously other sources, right? There’s YouTube videos and television shows, and podcasts and things where somebody else could proactively go out and get a sampling of what is this? What are these people like, you know, but we build impressions most strongly with the people we interact with.

Right? Because we all know implicitly that what you see in a TV show, you know, that’s not reality.

I mean, you watch TV show, and you’ll people shooting lightning out of the hands and stuff like that doesn’t happen in real life.

So if that’s not real, chances are this, the stereotypes in media are not real either.

For example, I’ve been to a Discord server, or a writing group.

And three or four of my friends, that group are Mexican, and I’ve had a chance to chat with them over the years, get to know them as individuals, not just based on their heritage, but as the as individual people.

And they have very strongly changed my perceptions of what someone who is a Mexican heritage is about, right? There’s a lot of stereotypes, many of them harmful in the United States about Mexican people.

And these friends of mine, as ambassadors, consciously or not, of Mexico, completely broke all those stereotypes, like, okay, that’s none of the stereotypes are correct, or even remotely close to correct.

You know, for example, two of them are phenomenal writers, phenomenal in English, not not just in Spanish, but in English.

I was like, and I dug in, and you know, for example, one of them doesn’t have a higher education degree, they just are really good at working in both languages.

And so little things like that, that broke stereotypes I had in my own head, about this minority subgroup.

So if you are in a minority position, either temporarily or permanently, right, you’re representing that group.

You have an obligation as an ambassador to represent it well.

Now, that doesn’t mean that you have to be perfect and polished all the time.

And you can’t say things.

Honestly, you absolutely can do that.

But just be aware that what you do controls the perceptions that people have not only have you, but of everybody in your group that they don’t necessarily know, especially if they they live in a community where they’re not exposed to more diversity, right.

So something to think about it in today’s mind means be aware of who you are an ambassador for, and do your best to conduct yourself appropriately.