How to Measure the Marketing Impact of Public Speaking

One of the constant questions about thought leadership and public speaking, especially when you’re speaking on behalf of a brand or company, is how do you measure the impact? How do you know when your public speaking is delivering any kind of benefit?

There are several ways to quantify the impact of public speaking; let’s look at a few of them.

Before we dig into measuring public speaking, we need to have some base data in place. We will need a working Google Analytics (or the web analytics system of your choice) account in place, with data collected, for a minimum of 6 months of data. Why 6 months? For some of the more advanced techniques, we’ll want lots of comparison opportunities. The Google Analytics account should be set up to track at least one goal.

You’ll need some kind of trackable offering for your speaking as well, something that audiences can take action on, be it a simple “subscribe to my email list” or a download that provides some benefit.

Finally, we’ll want some kind of URL shortener and/or custom domain names assigned to each speaker, for ease of tracking audience response.

The first, easiest way to track the impact of public speaking efforts is through direct impact. This is where our speakers share custom URLs that drive traffic back to our websites, and we’re then able to measure that impact. For example, when I speak, I typically will share the custom URL WhereCanIGetTheSlides.com, which redirects to the Trust Insights website and appends custom UTM tracking codes that indicate any visitor to that link is coming from a speech I’m giving.

You can, of course, use URL shorteners or redirects off your company website, but in general, the easier a URL is to remember after hearing it, the more likely it is that an audience will take action on it. My simple test for this is to say it to a smart assistant like Siri or Alexa (“Hey Siri, visit the site WhereCAnIGetTheSlides.com”). If they don’t get it right on the first try, I know the URL isn’t simple enough.

How do we find the information we’re generating? In Google Analytics, we create a segment for that traffic’s UTM tracking codes, and then we can see traffic coming in from it:

We can see the traffic to that speaking segment of the audience very clearly, including when I spoke at a large event.

Even more important, if we have goals and goal values set up and properly tracked, we can see that same traffic segment and the goal completions it generated:

This is a good start to measuring public speaking, but advocates of public speaking will say – correctly – that it’s an incomplete picture. What about people who hear a speaker and then go look them up later, or get back to the office a few days after an event?

So the question is, what other things might our public speaking have impacted during that timeframe? Here’s the challenge that almost every marketing organization has run into with public relations, brand building, and public speaking: interference. Very few organizations are doing one and only one thing at a given time. On any given day, various ad campaigns may be in flight. Something may be happening in social media. A direct mail campaign might be going out. Broadcast ads may be running.

All that makes it very difficult for the average marketer to figure out what the contribution of public speaking is to our marketing efforts because of all that interference. So how do we de-noise that, and still look at public speaking’s impacts on our marketing?

If we go back to our traffic data, we see when there are clear periods of time when public speaking is delivering direct impact. Using that information, we’ll make note of the fact that those periods are when we should be looking for impact. In an ideal situation, we’d be able to conduct A/B tests between days when we have speaking and days we don’t, but we can’t just shut off our marketing for a few days.

So, the next best thing is to use a statistical technique called propensity score modeling, which takes days when we’ve got something going on – like speaking – and tries to match them up with days when we don’t have speaking going on, but we’ve got other similar activities. For example, suppose on a given day, we’re speaking, but our company is also running PPC ads and has an email going out. We wouldn’t want to compare our speaking days to just any other day; we’d want to compare it, as best as possible, to another day when no speaking is happening, but PPC ads and an email are going out, to get as close to an apples-to-apples comparison as our speaking days.

What do we find? 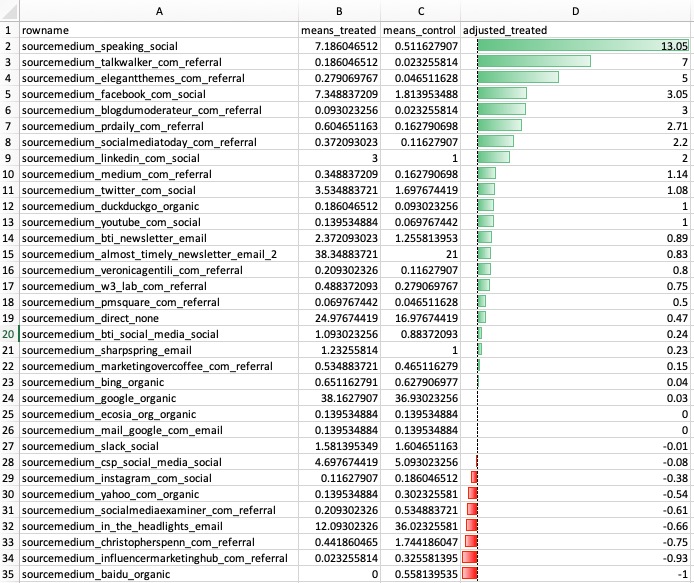 We obviously see the increase in speaking traffic during speaking periods; that’s a good sanity check. If that didn’t increase, it would mean we’ve done something wrong in the data processing itself. However, we also see other sources improving concurrently, such as Facebook and LinkedIn; this tells us these channels may be experiencing benefit from our stage presence/brand presence.

Many of the events we’re at are sending increased traffic as well, so our stage presence is complemented by event promotions.

Bear in mind that techniques such as propensity score modeling hint at causation but don’t provide definitive causal links between speaking and other marketing channels. Nonetheless, we do see some increases, so we’ve got at least the grounds to make a case for public speaking’s impact.

Now, this is a really good way of seeing what happens while we’re on stage and during a few days after. But what about the long-term impacts of public speaking? Public speaking is supposed to bolster awareness and trust in a company, so how do we measure that in the big picture?

The third level of measuring public speaking is to look at the behavior of the audience in the long-term, as opposed to narrow windows of time when events are happening. What does the halo effect of speaking look like?

To make this determination, we need a technique that can track users over long periods of time, to better understand their behavior in the big picture. That technique is attribution modeling. The very best attribution models, ones based in advanced data science and machine learning techniques, take into account channels like public speaking’s ability to attract users and then see what happens to those users over longer periods of time, sometimes as much as years.

The challenge with this kind of attribution modeling, the reason it’s not more common, is that it requires extensive, high-quality data typically gathered in a system like Google Analytics or ideally, inside a CRM. Especially for companies that have very long sales cycles (think years), the only reliable data will be on a per-customer basis in the CRM. What’s critical is the timeframe; we’re using models and data that span months, long after we’ve exited the stage. That’s what’s missing from the earlier methods – it’s good and important to measure our impact on stage and immediately after we get off stage, but what about a month, two months, three months later? Only attribution modeling, properly done, will tell us the long-term effects of our speaking.

Depending on your company’s data, you might even be able to attach a dollar value to that number. How much is a prospect worth to your company? A lead? A legitimate sales opportunity? Imagine a lead is worth $100 to your sales organization. If you had the same performance for public speaking as we do above, then the value of public speaking could be inferred to be $15,051. Now, if you know how much you spent on public speaking – which for the past 13 months (pandemic, for readers who read this after 2021) has been nearly zero because no one has traveled anywhere except your Zoom call, your kitchen, and your restroom – then the ROI on public speaking has been astonishingly high. Even in the before times, if you spent $10,000 on speaking expenses and you earned $15,000, you’d have a speaking ROI of 50%.

If you’re a fellow public speaker, make sure the organization you represent – be it yourself or a company – is set up to track data aggressively, so that you can demonstrate the value of what you do.

If you’re a marketing organization, the same advice applies. Ensure your data collection and analysis is robust and you’ll be able to understand the value of public speaking to your overall marketing efforts.