Once upon a time, a very long time ago in Internet years, I wrote a webinar and publication on finding your next job with social media. I stumbled over it recently while cleaning up one of my archives. While lots of the individual pieces are badly out of date, the work as a whole is still relevant. This series is a new version of the old stuff, modernized for today.

In the last post, we examined the 5C’s of effective networking. Today, we’ll dig into 3 concepts that will make your community and professional networking efforts more impactful:

Robert Metcalfe, the inventor of Ethernet and modern computer networks, created a law in the early days of computer networking. Metcalfe’s Law states that the value of a network is proportional to the number of people squared in the network. 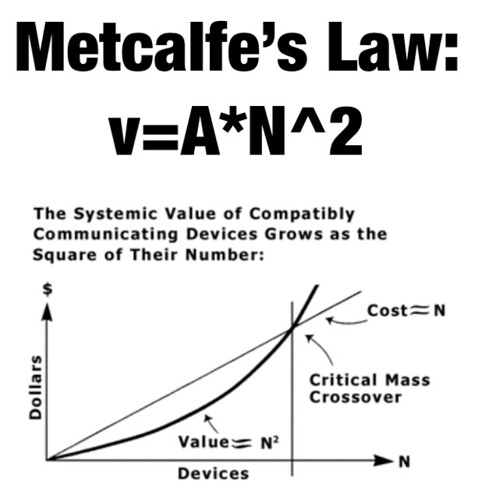 Think about this from the perspective of modern social networking. A network with one user isn’t a network at all. Social networking services have lived or died based on their number of users.

Every connection we help to make, every opportunity we broker strengthens our personal brand, our professional presence. Thus, it’s to our advantage to build networks to be larger rather than smaller. All other things being equal, choose to connect with others by default, then work to create connections and bridges between nodes in your network. Introduce people. Get to know the people in your network and who needs what.

From time to time, remind people that you’re active on other platforms. Perform what I call a “social synchronization” and highlight the networks you’re active on, especially if you have larger networks on Twitter or Facebook than LinkedIn, which is still regarded as the top business networking social medium.

Here’s an example of a Tweet I recently sent which accomplishes this: 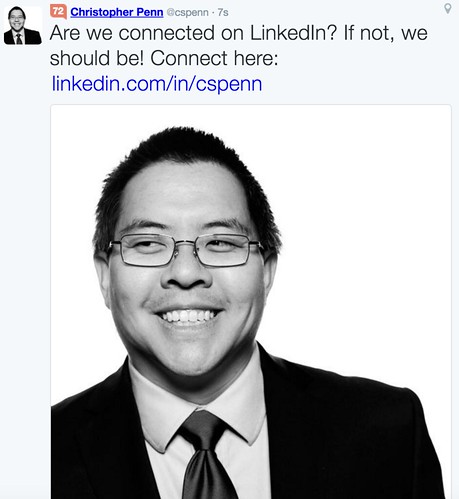 The third fundamental principle of modern networking is that you don’t own your networks. Your Facebook Page? Your Twitter handle? Your LinkedIn profile? You don’t own these things. You rent them. One of the reasons I encourage people to connect with me on LinkedIn is that it’s one of the only networks which allows me to download my connections, the basic connection details – including email address – of the people in my network.

From time to time, as you synchronize your social networks, use LinkedIn’s download feature to snag your network and archive it on your hard drive. Take the time to personally introduce yourself by email to each person – not with a mass mail, but with an actual personal email. You might be surprised at the results.

Next: Easy Wins in Proactive Outreach

In the next post, we’ll walk through some easy wins for prospecting, for reaching out to people to build your network or actively look for work.