Olivier Blanchard started a conversation yesterday on Facebook by positing that professional influencers may not move the needle for the brands that hire them, if we vet influencers only on audience reach/follower counts. He asked what the performance differences might be if we judged influencers on things like engagements or down funnel metrics like link clicks. Is there a difference? Is paying a ‘professional’ influencer worthwhile?

Using the advanced research facilities at SHIFT Communications, I took him up on the challenge. We pulled a list of 16 influencers on Twitter in the business and technology sector. 8 of them are brand-side influencers who generally do not accept money to promote content, other than from their employer. 8 of them are professional influencers who accept significant sponsorships above and beyond their employers, celebrities of sorts. Olivier provided the lists and classifications.

Let’s first look at the distribution of audience reach:

Our influence pool has an average following of 140,000 and a median following of 98,000. We see a reasonable distribution of unpaid (organic, in blue) and paid (in orange) influencers in our pool.

Let’s move beyond raw audience numbers to engagement. How much engagement do organic and paid influencers generate? We define engagement as the sum total of actions a person can take on an influencer’s status; on Twitter, that’s replies, likes (formerly Favorites), and retweets. We looked at the last year of data for these influencers and charted it out: 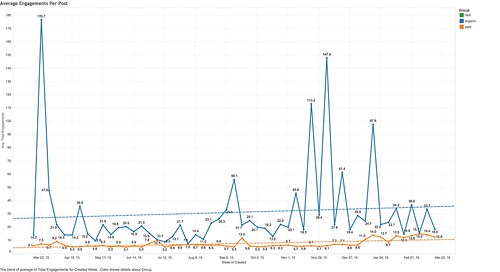 How impactful are influencers at engaging their audiences? We measured engagements divided by total audience size: 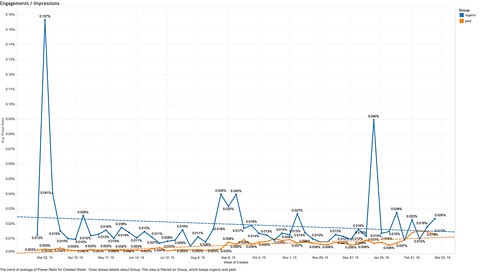 Let’s talk about where the rubber meets the road: clicks and audience shares. For the links influencers share, how many shares do those links get from the overall audience? How many clicks do influencers generate? Here’s where the stark difference lies:

What does all this data tell us? Be very careful how you vet influencers. The biggest megaphone in the room doesn’t necessarily mean spurring action we want as marketers. Take into account reach, of course. Take into account other factors, such as engagement, topical alignment, what else the influencer shares, and whether they generate any real action down the marketing funnel.

I encourage you to download a free eBook I wrote for SHIFT on cultivating influence for even more insight.