I shared the dire predictions of the Royal Bank of Scotland for 2016 recently; the TL;DR version was “panic, sell everything, and hide in your bunker“. Is their prediction warranted? Panic isn’t, but caution is.

One of the most important lessons about economics is to do your own work. Download the data, make your own charts, run your own analysis. Don’t rely solely on the words of pundits, especially if they have a vested economic interest of their own.

We’re looking like a top, a plateau. 2015 looks like an inflection point. Is a crash coming? Not super soon, but some losses are inevitable. 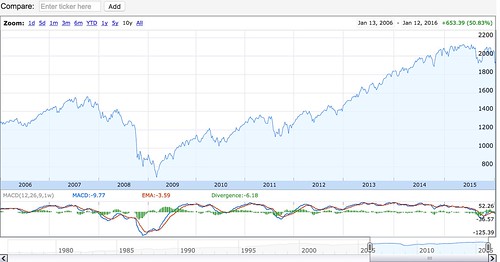 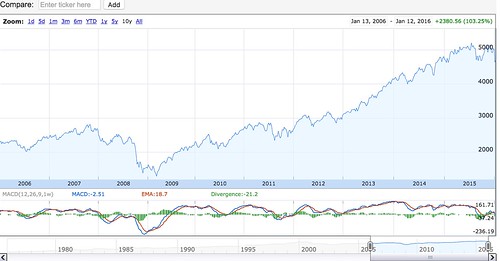 Let’s check market volatility, via the CBOE VIX. The VIX measures how volatile the market is; the more volatile, the more unsettled investors feel. 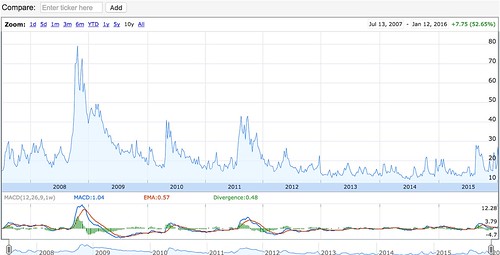 The second half of 2015 was rougher, to be sure. However, volatility still isn’t in Great Recession territory, though it is substantially higher than the past two years.

How is the banking ecosystem? We check 30 and 90 day LIBOR, the London InterBank Offering Rate. The more risk in the economy, the higher LIBOR is. The higher LIBOR is, the less banks trust each other and the more they want to hold onto cash. 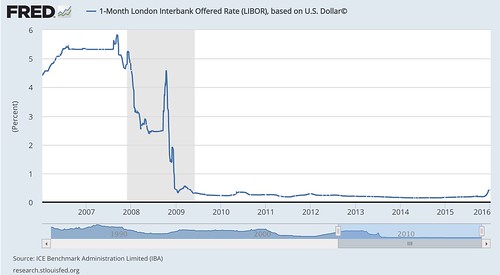 30 day LIBOR has ticked upwards noticeably after 4 years of calm conditions. Banks may see some short term risk, enough to consider stockpiling a bit of cash. 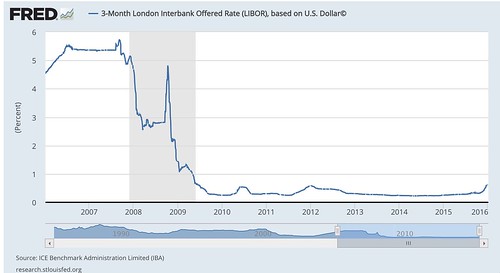 In the 90 day view, we see the same uptick. Banks are being more cautious about the first quarter of 2016.

Are either of these a cause for alarm? Not yet. While rates are ticking up, they’re nothing like they were during the previous bubble, shown just before the dark grey regions of the above two charts.

What about mortgages, the source of the previous economic crisis? 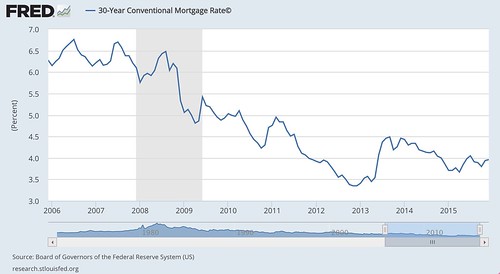 How about jobs? The best data source to look at is the alternative measures of underemployment, which takes into account not only people who are looking for work, but people working at less than full capacity (part time when they were full time), plus discouraged workers: 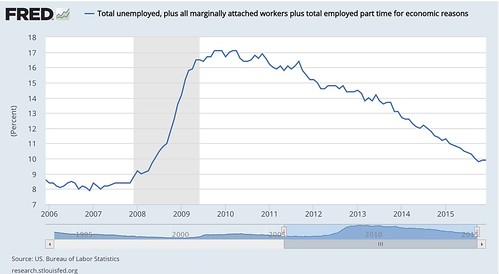 Overall underemployment looks good. The rate continues to steadily decline, though we might be seeing hints of a bottom.

Let’s turn our eyes overseas to the MSCI Emerging Markets index, an aggregated index of the economies of 23 nations:

MSCI has dropped 23% year over year, 32% off its 2015 high. This is noteworthy, indicating downward market pressures in emerging economies.

What about one of my former favorite indicators, the Baltic Dry Index (BDI)? BDI is the going cost of ocean-borne cargo container shipping rates. Unlike other indicators, it’s lagging; you don’t speculatively buy lots of cargo space you don’t need.

BDI remains at crazy lows, indicating that shipping of goods by cargo container continues to be weak.

What about consumer confidence? The OECD assembles some terrific data on this front: 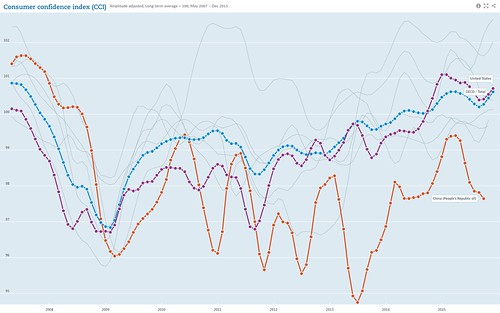 Do businesses feel the same? The OECD’s business confidence index is the place to look: 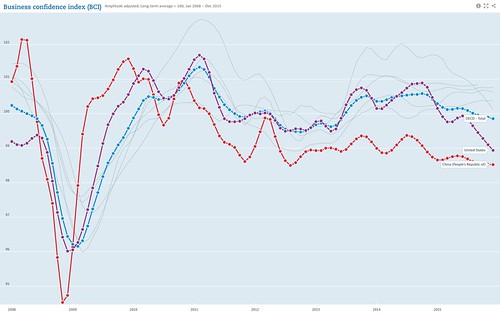 Business confidence in the economy has been eroding in the United States, sharply in 2015. Businesses are not as optimistic as consumers.

What about spot gold prices? Gold is where a fair number of investors run in a panic when economic conditions become unsettled.

So far, investors haven’t panicked into gold. In fact, gold is at multi-year lows.

What about black gold, also known as oil? Oil is essentially a tax; the more expensive energy is, the less consumers and businesses have to spend on discretionary items.

Oil has fallen off a cliff in the last year. We know this as consumers because the price at the pump is at $2 a gallon or less in the United States. If you drive a car or incur other oil-related expenses, you know this by the extra cash in your wallet.

Finally, a roundup of agricultural products.

Most agricultural commodities are at multi-year lows except for rice. Low agricultural prices mean lower fuel and food costs, which is good for the consumer, but bad for some producers and farmers.

What does it all mean?

Panic isn’t warranted, but caution is. We see what look like market tops in the stock markets, slightly increased volatility, and the floor falling out from under several major commodities, from food to fuel to gold. It’s a tough time to be a commodity producer, but a generally good time to be a consumer. Businesses feel caution is warranted; the underlying fundamentals around commodities are deflationary.

For the B2C marketer and business, 2016 still appears to be strong for you. Consumers have cash in their pockets, they’re getting jobs, confidence is rising, and commodity prices (and their derivative goods) are low.

For the B2B marketer and business, 2016 is shaping up to be a tough year. When businesses become cautious, they tend to slow down capital expenditures and investments. Whether businesses pare back hiring is yet to be seen.

To sum, don’t panic. It’s not justified. Be cautious. Keep your eyes open.

Most of all, don’t believe the hype – ever. Use the data sources in this post to do your own analysis. Do your own work!