Suppose you wanted to represent yourself in the best possible truthful light?

How would you set yourself up so you could appear as credible as possible?

More than mere puffery, this task is eminently practical. If you’re applying for a job, representing yourself strongly but truthfully is essential. If you’re building up your public speaking career, conference organizers need to know why you deserve to be on the stage. If you’re responsible for marketing or selling anything, your name will be Googled by the purchaser for any large purchase as part of due diligence.

How do you build a representation that’s accurate but impactful? The answer lies in what are called heuristics. Heuristics are our mental shortcuts, our quick decisions that help us get through life without being bogged down by analyzing everything. We learn heuristics very quickly as part of life. A baby learns that certain colored foods taste better than others, and kids routinely reject foods that are green.

As adults, we have heuristics operating all the time, algorithms that help us to make sense of the world. When I go to an event with my Nikon D90 and speed flash, people more often than not assume I work for the event in some official capacity. A large camera with extra camera gear triggers that heuristic in their heads. 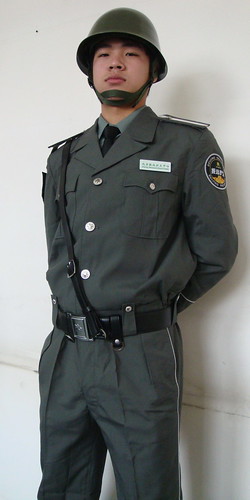 If you were to go to an Army surplus store and buy some dark blue fatigues, black boots, and sunglasses, you could stand in the middle of the street and credibly direct traffic. Drivers would assume based solely on your dress that you were somehow an official representative of the police. I advise not doing this, as impersonating a police officer in some places (most of the United States) is illegal.

For example, I have a blog. That in itself is almost meaningless, except to say that I can write a fair bit. I have a Twitter account. Again, that seems largely meaningless by itself, though with 83,000 followers, that says at least some people find something of value. Combine the two and I’m a very small niche publisher. I’ve written 16 books, of which 3 are my own (not work for hire). I speak at roughly a dozen events a year, of which two or three are usually keynotes.

Do you see how the heuristics are starting to stack up to convince you that I have some level of authority? Each data point by itself is relatively unimportant, but combined, they paint a broader picture. A set of blue fatigues by itself might or might not imply authority. Add some black boots and you’re closer. Add some mirrored sunglasses and you’re closer still. Add a black nylon webbing belt with a black flashlight and perhaps a black mobile phone case to it and you look astonishingly official.

Look at your own history. What can you create that conveys authority? If you don’t have much, what things can you get? For example, having a social media presence by itself is relatively unimportant. What if you added to it a blog with a lot of daily readership? Suppose you then added on Google Analytics certification? What about adding in some white papers and webinars? How about a weekly email newsletter? Those are all things you can do for very low cost or no cost at all, and in aggregate would demonstrate that you have a broad perspective on your area of expertise.