@cspenn Do you have any posts that cover how to choose which markets to expand into for businesses expanding to new international markets?

This is an interesting question, especially from a digital marketing perspective. The first and most logical choice is: go wherever the business is. To do this, you’d want to invest some time in audience research, to find out where the business actually is. One of the better tools for the job is Facebook, believe it or not. 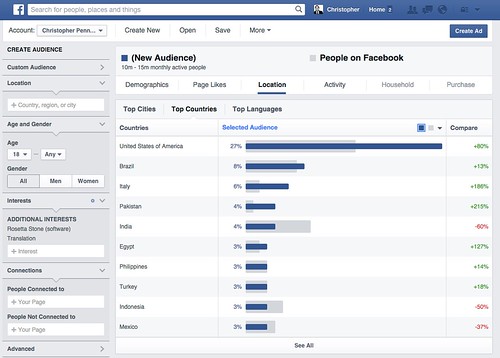 By cultures vary, I mean to say that just because a market is large, doesn’t mean you have the ability to operate effectively in it. In the example above, Brazil may be the largest potential market, but doing business in Brazil requires significant investment in people, because the Brazilian culture requires that you work with someone who can help you navigate the environment, language, and people.

This is largely true even of countries that share your language. For example, just because the United Kingdom, Canada, and Australia all share a generally understandable version of the same language as the United States does not mean that United States companies can copy and paste their marketing to those other nations.

So how do you make the determination for where you should go next? Think about which of these nations I could effectively operate in as a business. For example, despite the traffic, the United Kingdom might not be my first choice solely because of the time and significant cultural difference. I might instead look to my neighbor to the North, Canada. I can drive there, parts of it are in the same time zone as I am, and there’s enough cultural overlap that my marketing might work out of the box in the short term while I look to bring on local talent in the long term.

To wrap up, do your audience research, and then make the determination about where you can operate most effectively. Remember that these percentage numbers mask the true scale of the nations they represent. “Only” 6% of Facebook users may be interested in translation software that live in Italy, but 6% of 60 million people is still 3.6 million human beings. That’s a healthy potential market to start making inroads into.