How my social media adventure started

Arik Hansen recently blogged about some of the interesting start that today’s social media leaders have had. He was kind enough to include me and I thought I would give a little more color to my story than just a couple of company names.

My journey actually began as far back as my first job after college which was at Sony Electronics back in 1997. I worked in tech-support back then, helping executives in the North American headquarters get their technology working. The irony did not escape me that I was doing tech support at a tech company and the support cases were things like “I can’t make my email work”. That said, Sony was one of the more progressive companies back then, with working email and a website.

After a year of tech-support, I moved to Boston in order to seek further education. The main reason I moved was to train with Mark Davis at the Boston Martial Arts Center, a world-renowned martial arts teacher who I still study with today. In order to do something when I wasn’t at the dojo, I enrolled at Boston University’s Graduate School of Management. There, I got my Masters degree, and then started on my current career track.

During graduate school, our graduate theses were around work we did for local non-profits that needed the help and were willing to trade the help for our educational follies. My team was assigned to a company called CASCAP, which did residential transitional housing for the mentally ill. Most teams in our program spent time at their non-profits and produced a white paper of strategic recommendations about the business that might or might not have helped the non-profit. Our team did something else at my insistence: we actually did the work we recommended and deployed a Microsoft Exchange server on-premises at the non-profit and got 2 of the 14 housing units wired up. 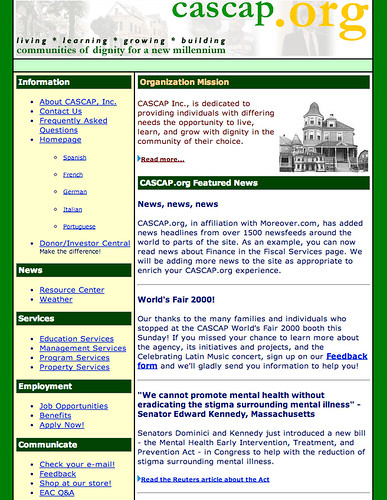 CASCAP became my first career after graduate school, continuing on the project that we’d started in school. CASCAP was also the first company where I deployed a full commercial website, which was groundbreaking at the time. Almost no non-profits had websites, much less websites able to accept donations, in 1999. During my tenure, the site did amazingly well, owing to the fact that the nascent field of SEO was still centered on things like keywords on the page (in very small text at the bottom, no less – ah, the easy days of SEO past).

The common theme with what I did back then and what I do today has not changed: I use digital technology to connect people to organizations, and to connect organizations with the world in meaningful ways that have clear ROI. The lesson for anyone starting out today is to find a place, find a space in the world that is being underserved by today’s technology and today’s modern marketing methods and serve it. It might be in a department at a large company, at a non-profit looking to make its mark in the world, or at a startup. Whatever the case is, look for the needs that aren’t being met and solve real problems to quickly begin building your own track record of wins.