I’m not sure there’s anything more boring in the world of marketing than a disembodied voice talking over static slides as a webinar, except maybe a sales demo of a disembodied voice talking over static slides. Either way, it’s boring, which means that people tune out almost immediately. If you had two-way webcams, I’d bet more than half of your audience would be crushing candy or updating Facebook with “This webinar is boring”.

That’s why I was eager to test out some gear from SHIFT client Personify. Their product is dirt-simple: slap a video image of you, green-screened, over top of your content, like so:

As long as you can turn stuff around in your brain so that your gestures are mirrored appropriately on-screen (think like a weather forecaster on TV), you can make much more interesting videos.

I used this yesterday on the webinar I was doing for work and the feedback I got was that it made the webinar much more compelling to watch, since people could see both me and the content. There was a reason to do more than just occasionally glance at the slides.

@chelpixie @justinlevy @cspenn It's really effective at keeping people's attention on the screen during a webinar. Nice!

The product has a couple of odd quirks. First, the Mac version is significantly behind the PC version in terms of features. If you’re on a Mac, you’ll need to do some interesting workarounds to deal with some of the issues, like recording and streaming. For the webinar yesterday (watch it here for a full demo), I used a Google+ Hangout on Air to screencast my entire screen. The software also does NOT work with the Mac implementation of Full Screen for an app. In order to use it on the webinar, I had to render my slides as a PDF, slap it in Preview, and turn off all the navigation so that it was as close to full screen as you could get: 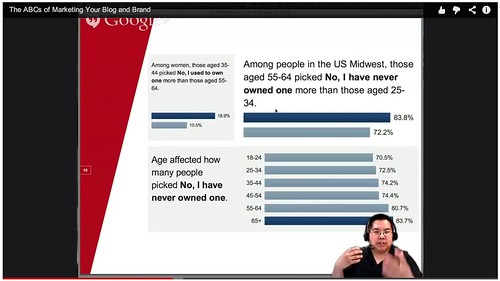 That said, I’ve now used it with Microsoft Lync, Citrix GotoMeeting, and Google+ Hangouts and it’s been smooth sailing each time on my Mac.

Second, because it essentially imposes a layer on top of your content, it interferes with your ability to click on stuff near/under your avatar. If you need to be doing highly interactive stuff in a product demo, that could get annoying quickly. You’d have to move your avatar every so often in order to click on buttons or make things go. For what I’ve used it for – webinars and sales demos of relatively static content – it works great. I could see it being an annoyance with a software demo.

Third, and this isn’t a quirk of the product but something to keep in mind, you’ll want to think carefully about your setup. For the webinar yesterday, I had dual screens running, with the slides and Personify avatar on one screen, the control room for my Google+ Hangout and Q&A on the second screen, my speaking notes on my iPad, and the live Twitter chat on my iPhone: 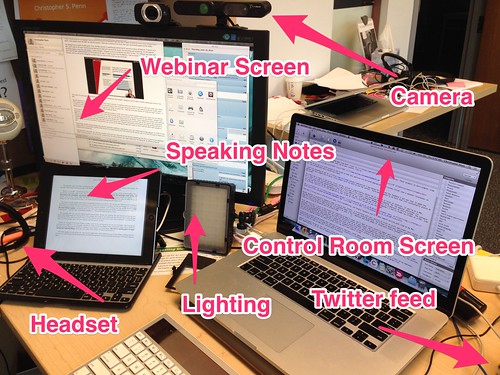 That’s indeed four screens controlled by one person, which could be a little overwhelming for some people, but I needed that many to ensure that all the content was working as intended. You could probably get away with two screens fairly easily, but I wouldn’t necessarily recommend using the product without a second screen of some kind (even a smartphone), just so you’re not tabbing through your email or other stuff you don’t want people to see. I also was using a USB headset for better audio quality and a battery-powered LED light so that I was lit properly. Again, you don’t NEED all that gear, but if you have it, use it.

If you’ve got visually boring content that requires voiceovers (webinars, sales demos, etc.), you might want to pick one up. It’s 199 for the camera (which is essentially a professional version of an Xbox Kinect) plus20/month for the service, but it’s a heck of a way to make your content more interesting.

Full Disclosure: Personify, Inc. sent me a review unit to test out. Personify did not directly compensate me, but is a client of my employer, SHIFT Communications. I do not receive compensation for any purchases you might make (but I’m hoping for an affiliate program).