Inevitably today, someone will go horribly off-brand and make an April Fool’s joke that does more damage than good. Someone will publish something that either is woefully unfunny or insulting. To help avoid this, here are four quick tips if you want to do something for April Fool’s that won’t set your brand on fire in a bad way.

1. Know what your brand is first. What does it actually stand for? What does it mean? If you don’t have a crystal clear understanding of your brand, your mission, and your vision, your jokes will not advance your brand, or may actually damage it.

2. Make a joke that’s an extension of your brand. If you’re Google, Google Nose or YouTube Winner makes total sense. It takes what people know about your brand and extends it into comedy territory. If you’re Blizzard Entertainment, Molten Core console edition makes sense – it’s taking an existing part of the brand and extending it in a funny way.

3. If you’re going to make a joke at someone’s expense, make it at your expense. Inevitably, if it’s at someone else’s expense, that someone may not be very happy with you.

4. Make a joke plausible enough that it could actually happen. The masters of this are the folks at ThinkGeek who invariably come up with joke items for sale in their store that customers actually demand they sell: 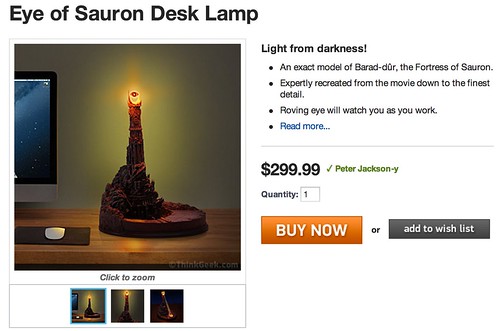 After all, who wouldn’t want an Eye of Sauron desk lamp? What was a joke becomes a profitable line of products. Blizzard Entertainment joked about having the Pandaren as a playable race in Warcraft and today we have the Mists of Pandaria expansion.

Good luck, pranksters, as you navigate the rocky waters of comedy today. One final tip: don’t count on the date or timestamp of your post to indicate it’s an April Fool’s Day joke. Tag it in the post itself, because when someone catches up on their reads in a couple of days, there’s a good chance they’ll take it seriously.