If you do a bunch of Googling, something as simple as waffles makes you scratch your head. Remember Eggo waffles, the brand behind the ad slogan “Leggo my eggo!”? Dig into the ingredients list:

Looks pretty reasonable, doesn’t it, except for the aluminum? I was curious about the last two, yellow 5 and yellow 6. One is a food coloring banned in some countries in the EU (tartrazine, yellow 5) and the other is derived from petroleum (disodium 6-hydroxy-5-[(4-sulfophenyl)azo]-2-naphthalenesulfonate, yellow 6). On June 30, 2010, the Center for Science in the Public Interest called for the FDA to ban Yellow 5. Executive Director Michael Jacobson said, “These synthetic chemicals do absolutely nothing to improve the nutritional quality or safety of foods, but trigger behavior problems in children and, possibly, cancer in anybody.”

Yummy. Who wants some petroleum distillates and aluminum in their waffles? I’ve leggo the Eggo.

So with that in mind, I asked myself, how hard could frozen waffles be? Make a bunch all at once, stick ’em in the freezer, right? Turns out it was ridiculously simple. Anyone with a bowl and a spoon can make waffles that are significantly healthier than prepackaged food. 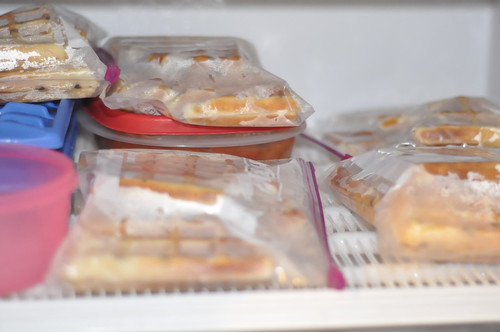 Here’s the recipe, in case you want to make your own and stop spending big bucks getting a load of crap in your waffles.

Makes 3 large waffles, or 12 small ones.

Here’s what I’m finding, the more I Google my food (and the ingredients of prepackaged versions): a fair number of foods are actually stupid easy to make. Not only that, they’re also less costly, you control the ingredients that go into them, and they taste better.

Take some of your favorite prepared foods and Google for how to make them at home. I think you’ll be surprised at the number of them that require little to no cooking skill and can save your money and your health.