The inherent flaw in recipes and notes 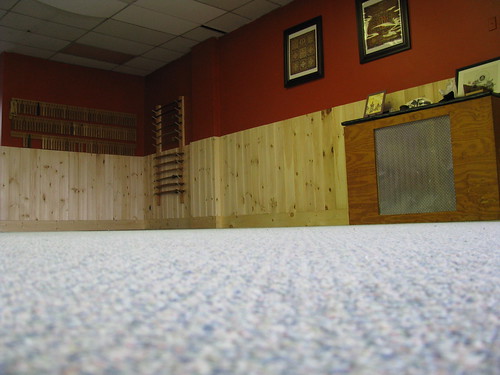 Last night at the dojo (the Boston Martial Arts Center), one of the junior students asked me if they could have a copy of my class notes. I declined as usual, and when asked why, I explained. My class notes, the stuff that I take notes on, is more than anything a compendium of wrong things.

By wrong things, I don’t mean factually incorrect, I mean the things that I get wrong. My notes are reminders of the things I’m not very good at or the things that I tend to forget or omit, and as such, things I tend to get right or am competent at barely get an acknowledgement. Copying my notes as-is would result in getting a list of mostly screw-ups. Here’s an example:

If you look, parts 3 and 5 are truncated to just the bare outline because I know what to do there. Parts 1 and 4 are things I tend to forget more, so they’re written out explicitly. Part 2 is a metaphor for the actual motion.

Now, if you’re trying to learn this technique from scratch, these notes will be more of a hindrance than a help. You might very well get parts 3 and 5 totally wrong, but because I found them easy to remember, my notes don’t really include them. If you already know the technique, the notes don’t help much anyway.

Think about your own experience in the kitchen, if you’ve ever written down a recipe or seen someone write down a recipe while they’re cooking. They put in the stuff that sticks out in their heads, but they tend to leave out small but vitally important pieces like a pinch of salt here, or when to stir there. If you go off the recipe alone, with no experience or guidance, you will get an imperfect result.

What does this have to do with marketing? If you’re working at becoming a better digital marketer and you’re relying on the recipes that other people publish, like when Chris Brogan writes about how to be better at Twitter or DJ Waldow writes about how to be better at email, one of the most important things to keep in mind is that you’re relying on their recollections only of what’s important or what they’re inherently less good at. They’re sharing in many cases where they went wrong. Sometimes that’s valuable, but sometimes you’re going wrong in a place or in a method that they didn’t, and thus your recipe continues to not perform.

How do you avoid this or mitigate this? The answer unsurprisingly comes from the dojo, too. When we look as junior practitioners at how our teachers are doing things, one of the things we need to focus on are the results they generate. My teacher, Mark Davis, is wonderfully good at taking away your balance, sometimes in ways so subtle that you’ve lost the fight long before it starts. He has been practicing in this particular martial method for over 30 years now, so he’s got much more experience and practice time in than I do. He’s also almost two feet taller than me and much stronger, which only creates more differences in how we move. What works for him may not necessarily work as well for me.

In order to learn effectively from him, I have to look at the results he generates, the effect he has. I can absolutely get a sense of how he generates them by watching him, but when it comes to creating those results, I have a smaller and less capable toolkit than he does. I have to use more crude methods to create the same outcome and achieve the goal. Only by doing that under his guidance can I improve my skills and create the results I want.

Likewise, when trying to become a better digital marketer, the only person who can do Chris Brogan well is Chris Brogan. Following his recipe blindly without acknowledging that your network, your content, and your methods are inherently different will lead only to pale imitations that don’t create the actual results you want, while ignoring your inherent strengths that he doesn’t have.

Start with a recipe, but then watch, observe, take your own notes, and ultimately practice a whole lot until you can, with your own abilities, create the results you want.