Marketing strategy: be where others are not 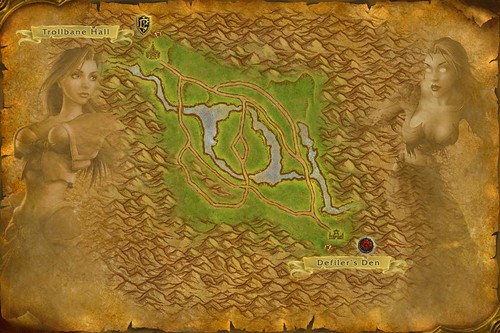 To be successful in the World of Warcraft Arathi Basin battleground, you have to capture and hold 3 out of 5 flags at various points in the landscape over a period of time. You and 14 of your team members face off against 15 opponents. Winning Arathi Basin very often feels like either a long slog where you and the other team members continually die, resurrect, and die repeatedly or a shutout where you hold all 5 flags and win in mere minutes.

There are 5 flags and 15 people. Very often, herd mentality takes over and you follow the pack of your team members going from flag to flag, capturing and losing them as you swarm from point to point. The other team is doing the same thing and while that creates some exciting, epic, challenging battles, ultimately winning the battle means losing the entire game.

One of the secrets to Arathi Basin is this: be where the other team isn’t. In fact, be where no one is. Is everyone fighting it out at Blacksmith? Go sneak over to Farm and capture it while no one’s looking. Is there only a token defender at Mine? Bring a friend and wipe out their guard, then capture the Mine. (for those that play, the other secret is: defend what you cap)

This is pure blue ocean strategy: by adding pressure and capturing objectives that people are ignoring, you can greatly influence the outcome of the match. Either you force the opposing team to split their forces or you keep the flag, both of which are positive outcomes for your team. Note that what’s important here is being where people aren’t. This doesn’t mean making something up or creating something out of the blue – quite the contrary. New flags don’t appear in Arathi Basin. You’re simply going where attention isn’t.

It should be no leap at all to apply this strategy to your digital marketing efforts. Is everyone talking about social media ROI? Find a different target like audience building. Is everyone talking about Instagram and the tech bubble? Blog about something else. That’s one of the many reasons I blog about Warcraft as a business learning platform – because no one else is. Plenty of people are blogging about Warcraft. Plenty of people are blogging about business. Not many that I’ve found are putting them together, and thus my blog can thrive in a small niche that overlaps two very large ones.

Be where others are not and you won’t get lost in the noise. One more copycat blog post about Instagram’s acquisition or how to pin things up on Pinterest won’t be noticed, but find something on the edge (like a connector that links Instagram to Pinterest via the APIs) and you’ll have a place to call your own.