The elfen rogue paced almost nervously around the stables. Hidden in the shadows, ducking from alcove to alcove, she awaited the inevitable arrival of her enemies. She constantly stared at the grasses and rocks nearby, looking for the telltale signs of someone nearby who shouldn’t be – blades of grass at unnatural angles, pebbles freshly turned over. Nothing yet. 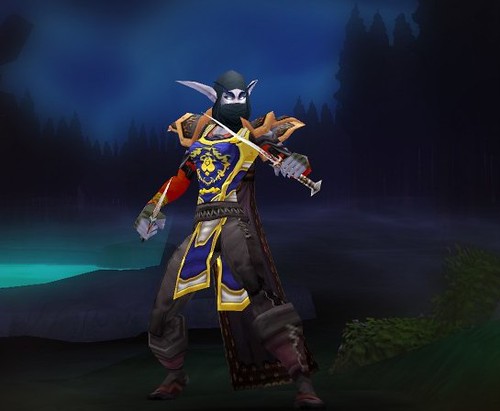 Her ears perked up. In the distance, she heard the rhythm of hoofbeats as a beast with rider approached. She peeked around the nearest corner and saw a warrior on a grey wolf thundering up the road, the setting sun glinting off his gold-trimmed plate armor. He certainly was making no effort to hide his approach, but then again, with that much armor, why would he need to? She hefted her daggers one last time, catching the scent of the crippling poisions covering each blade, and prepared herself.

The warrior dismounted near the barn and shouted something in a guttural language the elf couldn’t understand, but recognized as a rallying cry. At that very moment, the rogue stepped quickly through the shadows and ambushed him, stabbing a dagger deep into his back at precisely the right spot between the plating. He screamed and turned to find his assailant, only to have an eye gouged with another knife almost magically appearing. The warrior swung desperately with his battle axe, but the poisons and injuries skewed his aim, hitting the rogue with only a glancing blow. The elf ducked under a second swing of the massive axe and ripped both daggers across the warrior’s belly, just at the seam where the chest plating ended and the belt began. His guts literally fell to the ground as he passed away from the evisceration.

The rogue stepped back, catching her breath and triumphantly removing her own leather mask to look at her work. She’d successfully defended herself against a heavily armored monster that could have cleaved her in two. The stables were safe for the moment, a vital point for her faction’s eventual conquest of the basin. The elf sat down to catch her breath and grab a drink of water. A lesson from the past, from her teacher, a master rogue himself, drifted into her mind: the first thing you do after you win a battle is to tighten your helmet straps. She chuckled quietly, wondering what her teacher would think of her now after downing a superior assailant, and reached for her daggers.

In the blink of an eye, she felt a searing pain and wetness as the water in her stomach mixed with her blood, both running down her torso from a gaping wound. Her daggers slipped loosely from her fingers. The warrior’s hidden companion, another rogue, had appeared behind her and run her through with a wickedly serrated sword.

The last thing she saw was her killer’s tusked, toothy grin as he vanished into the shadows of the stables, awaiting his next victim as she had just done. Her teacher had been right, but she’d have to wait until her next life to tell him that.

Players of World of Warcraft will certainly recognize the above scene as a typical 2 minutes in the Arathi Basin battleground. The core lesson for us all, whether in marketing, management, or gameplay, is the rogue’s lesson: the first thing you do after you win a battle is tighten your helmet straps. That’s a lesson from the Japanese martial arts and an admonishment that we are often sloppiest after a big win. Tighten your helmet straps, immediately get ready for the next battle even as you celebrate, and you’ll avoid being ambushed by a competitor intent on winning out over you.