What Akil’Zon Can Teach You About Marketing Skillsets

Last night, an intrepid group of adventurers stepped up to attack Akil’Zon, the Eagle boss in Zul’Aman, one of World of Warcraft’s many dungeons. Little did said group know that it was a trap: with certain combinations of players (melee DPS + no mass dispel, for those who play), the encounter is nearly impossible to complete. 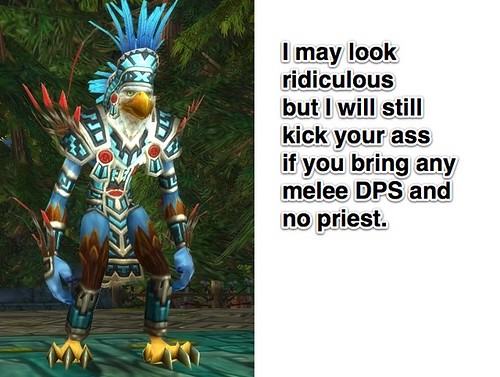 You see, each class (role) in World of Warcraft is capable of some talents and not others. Paladin healers are extremely good at patching up one person at a time. Priests are very good at patching up whole groups of people. Druids can heal people over time as opposed to instantly (which is handier than you’d think). Some healers can get rid of poison, while others can remove disease, curses, and other delights. The catch is that no one class can do it all.

If you want to know how an encounter is likely to go, you look at what a boss is capable of in terms of damage, and then you look at what your team can do to address it. In the case of Akil’Zon, he is adept at spreading a particular kind of magic damage that needs to be dispelled. If you have a healer that can’t dispel that damage en masse, everyone dies, which is more or less what happened to our little group last night.

What does any of this have to do with marketing? Simple: there will be some marketing problems for which you don’t currently have the right abilities on your team. Look at the standard three vectors of any business problem as an example: speed of execution, quality of execution, and cost of execution. Just like a World of Warcraft team, there’s a very good chance your individual abilities will cover two of the three at best.

There’s a good chance, because we tend to hire people who are similar to ourselves, that your entire team has that same focus. You may be very good at solving problems quickly and cheaply, but not necessarily effectively or with high quality. You may be able to solve problems cheaply and effectively, but not quickly, lagging behind your competitors.

The solution, once you realize where your gaps are, to both your marketing team issues and your World of Warcraft issues, boils down to two choices:

1. Change your strategy. If you have gaps in your skillsets, you have to change the fight somehow. If you’re not good at speed of execution, you need to plan very far ahead so that your execution time is timed with your competitors seamlessly, as if you could execute quickly. If you’re not good at quality of execution, you need to build in extra QA time before releasing to market so that you give the appearance of having the same quality as your competitors.

2. Change your team. If the gaps in skillsets isn’t surmountable by a change in strategy, then you must change up the team to address the weakness. With Akil’Zon, chances are good the encounter would be much easier if we simply changed out the warrior and paladin with a mage and another hunter, thus negating his special ability. The downside of changing up your team is that when you do so, you introduce new vulnerabilities and weaknesses that can bite you down the line, and those may be even more difficult to adjust to.

Generally speaking, I’ll always try to change strategy first before changing up teams. If you’ve got good people, they are far more likely to be able to learn and adapt than constantly churning butts in seats, and like World of Warcraft, most marketing encounters can usually be beaten with enough experimentation and testing.

What about you? Do you or your company change strategies or teams faster? Which has been more effective?