In classical physics, there are two very basic forms of energy (discounting those nutty folks in the quantum mechanics department): potential and kinetic energy.

Potential energy is energy that hasn’t been used yet. Push a rock to the top of a hill and it has tremendous potential energy, but it’s not energy being exerted because the rock is just sitting there.

Kinetic energy is energy in motion, energy at work. Give the rock at the top of the hill a shove and all that potential is released as kinetic energy as it tumbles down the hill.

Once the rock reaches bottom, you push it back up the hill to restore its potential energy. In addition to being the foundation of the myth of Sisyphus, this is how most people approach marketing. What do I mean? They do a lot of networking, a lot of pushing the rock up the hill, a lot of building potential, and then they enjoy the ride down the hill as all that potential releases itself as kinetic energy. Their pipelines fill with sales, their clients send them work, their bills get paid, and life is good. 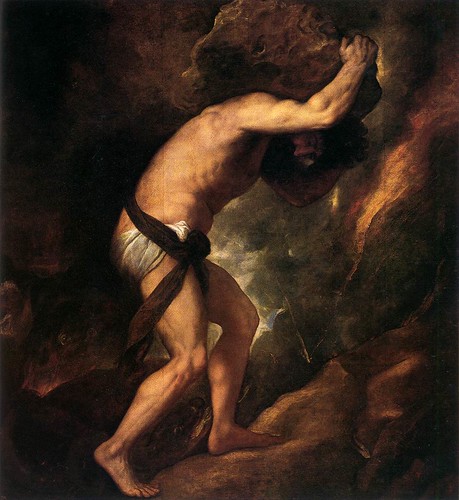 This is Sisyphean marketing at its worst, creating boom and bust cycles for your business that generate results cyclically, with dry spells and enormous stress between the bursts of activity. This is the way to heartburn and much more.

The challenge is marshaling enough resources to keep more than one rock going at any given time. You can do this any number of ways. You can alternate pushing uphill while taking advantage of the downhill energy at the expense of missing half of the energy being released. This is a recipe for frustration.

You can ask for lots of hands to give little pushes to another rock, in a sort of crowdsourcing, hoping that lots of hands can get another rock to the top without you. This is a recipe for disaster, since there’s a chance the crowd won’t be there when you need them the most.

Ultimately, you will end up needing to hire someone else to push another rock or two uphill while you focus on taking advantage of the energy being released from one going downhill in order to make the most of your resources.

Once you transcend the idea that there is only one rock to push up a hill and ride down, you can begin bringing in resources you need for more than one rock, for more than one pathway to success. Only by realizing this can you set yourself on the path towards marketing success.