While there are any number of excellent causes out there that need and demand attention, I want to draw yours towards something relatively painless: conference charity. As someone who has attended, planned, and created conferences of all stripes, from Podcamp to giant shows, I can say with great confidence that there’s always room around the edges. 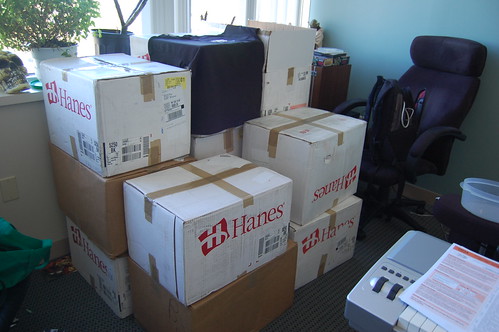 Crates of shirts from Podcamp Boston 2

At the end of a conference, we all shake hands, exchange business cards, and go our separate ways. What we don’t pay attention to is the army of venue staff cleaning things up, most of which goes straight to your nearest garbage dump. Go look at the trash bins after an event and you’ll find everything from untouched meals to piles of shirts to televisions (seriously, I saw this after a major electronics show – the vendors tossed their gear rather than pay to ship it back).

Obviously, all that stuff at the edges, the excess, can find new homes. After every Podcamp Boston, we call in the Pine Street Inn to take away leftover food, which is distributed to Boston’s homeless. After the Blue Sky Factory user conference in the fall of last year, the local Catholic Charities did the same with the leftover food in Baltimore. Back when Podcamps were printing t-shirts for every event, a good number of the leftovers (especially from Podcamp Boston 2) ended up going to several local homeless shelters, because the shirts were perfectly good. I get tons of trade show swag including more pens than I could possibly count, and most of those end up at the Society of St. Vincent de Paul, a local charity near my home. Larger stuff gets picked up for free from the Vietnam Veteran’s Association.

The point isn’t to say here’s stuff I do. The point is to say that you’ve got tons of stuff from conferences that deserves a better place than a trash can. If you’re a conference organizer or event planner, you have literal mountains of stuff that other people will value greatly, especially after your attendees have left. You need only one look at the grateful faces in the local soup kitchen when you walk in with a few crates of really good conference food to know that there is always a home for leftovers. You need only one look at the faces of the kids at a local program when you drop off a few boxes of promotional stuffed animals that no one took at your trade show booth to know that a tiny amount of effort and no money on your part can still make a big impact.

If you want to make a painless difference at upcoming events, ask whenever you register if the event organizers will be donating leftovers of any kind (food, clothing, etc.) to the needy once the event ends, whether it’s a local Podcamp or SxSW. If the event organizers say no, ask them if it’s okay if you coordinate it, then find the local charities that can use that event’s leftovers and arrange to have them swing by at the end of the day to pick it up. If you’re an event organizer, make sure you have charities at the ready to pick stuff up when the day is done. (as a bonus, you can take a tax deduction on anything you donate) If you see tremendous waste from an event, do what you can to salvage at least some of it – if you see a few boxes of shirts sitting next to a dumpster, call in the troops to come rescue them.

In these times, charity is needed more than ever. The good news is that you have it within your power to make a difference at conferences and events with just a phone call or two. You know what needs to be done now. Go and do likewise.