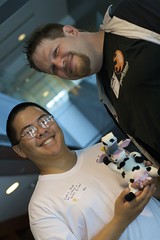 Every year, Chris Brogan has introduced a theme summed up in three words. I enjoy playing along with the theme as it usually does a good job of crystallizing what the year will be about. They’re not goals so much as lenses, ways to focus and make decisions about whether something is worth doing or worth investigating. 2011’s three words for me are:

As the year progresses, I’m sure I’ll be sharing some of the outputs from the research. Some stuff will remain hidden by necessity (or contractual requirement) while other stuff will appear on the blog here or in the other channels I participate in. Stay tuned in and what I can share, I will.