One claim I’ve heard repeatedly about lighter fluid and grilling is that it imparts a flavor to your food. Sorry folks, I’ve got to call excremento de toro on this. Let’s hit the science! 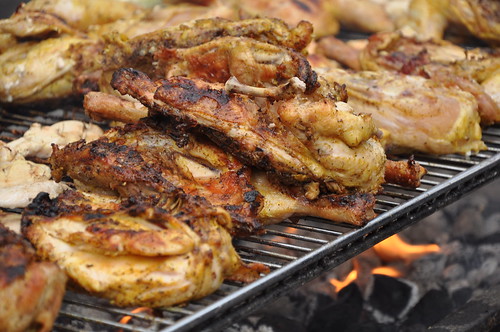 Most lighter fluid is an aliphatic petroleum distillate of some kind, similar if not identical to naphtha. While individual manufacturers don’t disclose the exact ingredients of their lighter fluids, it just takes a quick Google for the MSDS (material safety data sheets) for just about any consumer product to at least get an idea of what’s inside, if not exact composition.

So let’s look at some of the properties of this class of chemicals:

Basic chemistry says that even if you dump an entire bottle of lighter fluid onto your grill, unless the food is on there while you’re pouring on the fluid (which is stupid for different reasons), there will be no trace of it left by the time you’re actually ready to cook. I can’t think of a single part of a charcoal grill interior that would be less than 200 degrees Fahrenheit, which is when these fluids would boil away.

The basic truth is this: lighter fluid, unless you’re pouring it on while the food is on the grill, simply boils up and burns away far too quickly for it to have any impact on the food you’re cooking.

Full disclosure: no one from the lighter fluid industry paid for this post. It’s just me getting cranky at misconceptions fueled [pun] by lack of science knowledge.