Why you must bet the farm on mobile and social media

Why you must bet the farm on mobile and social media 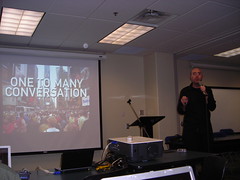 Mitch Joel‘s keynote at MarketingProfs (which is a neat evolution of a talk I saw him give at PodCamp Toronto years ago) sparked an idea in my head about how we’re communicating with customers and what it means for your business. In his talk, he mentions the internal conversation, the one to one conversation, and the one to many conversation – how marketers can interact with their audiences.

Let’s take this a step further. Before we do, let’s look at a few changes in computing and communications.

The 1990s were the decade of email and email marketing. Computers were leashed to the wall for nearly every task. Even my ultra-awesome at the time Powerbook 1400cs (cs stood for color screen, imagine that!) needed to be tied to the wall for any form of communications. Most people were still computing using machines the size of aircraft carriers, and while the Web had just gotten popular amongst the high-tech crowd, by no means was it mainstream. Email was it, partly because email was something that people could grasp onto and understand immediately – form of electronic communications that worked very much like the real world’s analog equivalents. There were letters, addresses, inboxes, etc. – a good entry point for many.

2000-2009 was the decade of the Web, unquestionably. Computers got smaller and much, much cheaper. The decade started out with the Pentium III line of processors barely topping 1 GHz, and ended with computers shipping with four-core CPUs. People figured out the Web, they figured out what was possible beyond making a brochure of their company. YouTube, MySpace, Facebook, and Twitter arrived. Wireless Internet access via Wi-Fi finally got hot and achieved some level of market penetration.

Here we are in 2010. Computers are shipping now with as much processing power in a handheld as in a desktop, and Wi-Fi + 3G are the standard rather than the exception. The latest computer is fully mobile – the iPad – needing only to stop to recharge its internal battery and not much else. All this and we’re barely into the mobile revolution. This corresponds with the latest change of mind – social media.

While social media got its start in the era of the Web, it’s rapidly evolving to take advantage of the devices now afforded to it in ways the regular web simply cannot. There’s nothing more social than hanging out with friends and passing a mobile device for someone to have a quick laugh at a text, a mobile pic, or a Tweet. There’s nothing more social than sitting with colleagues and just handing someone an iPad to say, “look at this…”

As devices get smaller and easier to use, they become more social. Clay Shirky said it best – when something becomes technologically boring, it becomes socially interesting. In the case of the iPhone and iPad, the interface becomes so intuitive so quickly that it fades away to nothingness, leaving only you and what you aim to accomplish.

Social – and the mobile devices that will increasingly power it – is the next logical extension of Mitch’s framework. Social is the many to many conversation, where you as a marketer are an active participant, but you’re not in control, not in charge, not even directing the conversation. You are among your peers, interacting, collaborating, and creating.

In this framework, that also means that everything you do has to have at least an idea of how it will appear in a mobile computing landscape. If all you do is broadcast useless updates on Facebook and Twitter, you won’t be shared or talked about. You’ll stop appearing in people’s streams – and when the majority of communication is done on smaller form factor mobile devices, what little slice of screen real estate attention you have left will vanish.

If someone were to pass around your web site on a mobile device at an executive roundtable, what would they see?

The future based on trend growth is clear: mobile devices will power the way your prospective customers communicate, and social media will be the many to many conversation medium in which you will do business. Bear in mind, there will still be one to one and one to many – but there will also be many to many, and you need to be there.