The fictional nature of money

How real is money? 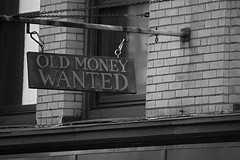 From one perspective, it’s the most real thing in the world. Without it, you don’t eat, you don’t have a place to live, no clothes to wear, etc. unless you’re living out in the wilderness, foraging off the land. Money can be a tremendous amplifier of personal power. With an inexhaustible supply of money, you could solve world hunger, cure disease, and end conflict.

On the other hand, money is entirely fictional. It’s a construct, an artificial intermediary between things we value, because we may not value them equally or at the same time. I may sell email marketing and you may sell search engine optimization. If I don’t need SEO, no matter how valuable your skills are, I won’t trade with you no matter how much you need email marketing. With money, if someone else needs SEO, you can take their money and then give me that money for email marketing.

How fictional is money? The recent stock market mini-crash (due to a trading software error) caused several indexes to lurch as much as 10% below their value in mere seconds. At one point, the Dow Jones Industrial Average was down 998 points. This erased as much as $1.25 trillion dollars of theoretical wealth in mere minutes. Think about that for a second. Think about how much money that would be if you had it in your bank account.

Think about the fact that $1.25 trillion was erased, vaporized, in just minutes. Imagine every student in college right now quitting all at once, or an entire city block vanishing in just minutes. That’s staggering, when you think about it. It’s hard to wrap your brain around.

Now think about the fact that the NASDAQ ordered a nullification of trades between 2:40 PM and 3:00 PM (when the mini-crash happened) for trades exceeding 60% of market value in either direction. Poof! Suddenly a big chunk of that imaginary money that was lost is back again.

What does this all mean for you? Think about your attitudes towards money, towards what you’re chasing. It’s a completely fictional construct that in our society is anchored to faith alone, making it the one true faith-based initiative our government has successfully created. Money is worth only what society believes it to be worth, because we can create or destroy vast quantities of it in minutes. It has no intrinsic value.

More important, if it’s entirely fictional, if it’s anchored only in belief of value, then instead of chasing money, think about how to create the perception of value. Think about how to inspire in someone else the desire to give you anything you want in exchange for that perceived value. What do people value about you, about your products or services? How can you provide more of that value perception? How can you boost the perception of the value that’s already there?

Change your focus from trying to take other people’s money to creating the perception of value and see if other people start handing you a lot more money.