One of the things I did at the end of the year last year was to review the top posts of 2009, and that got me thinking: why don’t we do this stuff more often, like quarterly? I think it’s because we, the content creators, assume it’s been seen and seen recently. We just wrote it a couple of months ago, right? 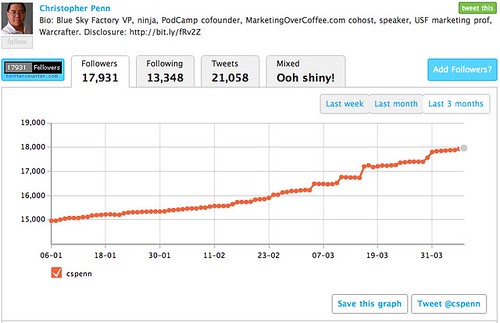 That’s nearly 3,000 new friends who are tuning in at least peripherally to what I’ve created that weren’t tuned in when the ball dropped in Times Square.

It would logically make sense to highlight some of the things they might have missed, wouldn’t it? Make them a Vox Populi list, a list of the stuff that has been most popular on your blog. (for the non-Latin-speaking crowd, vox populi means voice of the people)

If you missed the highlighting tip at the end of last year, it’s fairly simple. Hop into your Google Analytics account and select Content > Top Content. Set your time range as needed (in this case Q1 2010, 1/1/2010-3/31/2010), and then expand the list to show the top 25 items (since the top 10 will invariably include the homepage). Then simply assemble your list, copying and pasting URLs.

So, to all the new friends who’ve signed on in one way or another since the beginning of the year, I present to you my Vox Populi list for the most popular content of Q1:

10. What you need to succeed in social media

5. Turning your Kindle into the best newsstand ever for free

3. How to back up your WordPress blog in 60 seconds

2. The reason why your personal brand sucks

1. Why Google Buzz is brilliant and deadly to social media

Some other things to think about – maybe do a red-headed stepchild post of the 10 posts that got the least attention for one reason or another. If you manage multiple blogs, aggregate the top 10 lists from each, or highlight selections from each. Whatever you do, use the data, use the analytics you’re gathering for something!