Yes, you're in a depression

There’s no formal economic definition of a depression like there is a recession. That said, a depression is basically a really bad recession. The current environment fits that description aptly. Despite wishes to the contrary, more folks are realizing that we are in the midst of a new depression.

International Monetary Fund chief Dominique Strauss-Kahn said the world’s advanced economies — the U.S., Western Europe and Japan — are “already in depression,” and that the IMF could slash its global growth forecasts further. The “worst cannot be ruled out,” he said.

The IMF managing director’s comments to reporters after a speech in Kuala Lumpur, Malaysia, represent the most dire estimate thus far of the state of the global economy by a major political figure, and were far more pessimistic than forecasts released by the IMF as recently Jan. 28.

‘WE SHOULD agree as a world on a monetary and fiscal stimulus that will take the world out of r… depression.” Thus spake Gordon Brown at Prime Minister’s Questions last Wednesday, creating shock waves as far afield as Washington (“He said the D-word!”).

The economy is “severely depressed,” and the U.S. faces “horrific” deficits over the long term, Yellen said in response to audience questions. 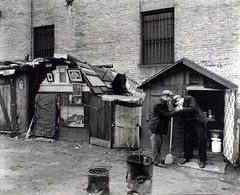 Yes, it’s a depression. The D-word. It’s okay to say it. It’s okay to admit it, because to use it brings our public discourse in alignment with reality.

Percentage-wise, the percent of the labor force unemployed during the depression of the 1930s was much higher than today. That’s what you hear politicians say over and over again as they try to soothe anxieties of the public that are looking at a very different reality than the marbled chambers of Congress.

If we’re willing to drop false pretenses and admit in our public conversation that yes, this is a real depression, perhaps that’s the wakeup call that our political leaders need to hear. Drop your stupid partisan agendas, BOTH parties, listen to the economists who have been proven right over and over again in this climate (Nouriel Roubini, James K. Galbraith, many others), and get America moving again.