Fundamentally, the entire credit crisis has been caused by two basic problems.

That sounds really trite and overly simplified, doesn’t it? The fact of the matter is that it’s true. The housing crisis wasn’t caused by a surplus of houses, but by an overeagerness to lend without considering a borrower’s ability to repay. Easy credit meant demand for houses went up, and supply went up to keep pace. Now that credit is more restricted and borrowing is harder, supply is up but demand is down.

Second fact of the matter is that saving is down, considerably. The average American over the past five years has spent more than they earned to the tune of 130%, relying on easy access to, yes, credit, to fulfill their consumerist desires. With no money put aside for a rainy day, vast numbers of Americans are finding themselves underwater in a financial hurricane. In the past, when the economy has taken a downturn, Americans had some financial cushion to rely on, but with the devaluation of stocks, even things like 401(k) retirement plans have lost considerable value. 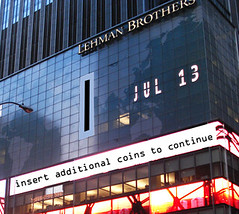 The bank bailout proposals currently floating around Congress do nothing to address either issue. Secretary Paulson’s plan calls for 700 billion – that’s700,000,000,000 – to buy poor quality assets (failed mortgages and investments) from banks and try to sell them off at a later date. If you as a banker, rationally, want to do what is best for your bank, you’ll gladly sell the Treasury all your garbage and keep the performing loans for yourself. I would, rationally, because that’s good business.

What happens to the average homedebtor who has fallen behind on their mortgage? Absolutely nothing. No help at all. Why? The bank has been relieved of its obligation to investors but the homedebtor has not. Wall Street profits, but Main Street remains underwater.

So what’s the alternative? How can we find a real solution to this mess? Clearly, bailing out Wall Street and the wealthy friends of Secretary Paulson will do nothing to help the average homedebtor.

We look to economics 101. Supply of houses still exceeds demand. You can change this equation by increasing demand or reducing supply. The general talking point behind the bailout is that banks will be willing to lend again – but it’s lending that got us into trouble in the first place. That’s like giving a bottle of Jack to an alcoholic trying to quit. Yes, the tremors stop, but the root problem remains.

Increasing demand through lending is a no-go. That leaves reducing supply. We have currently anywhere from 9 to 20 months of inventory in housing, depending on the regional market, and a healthy level of inventory is around 6 months, or so my realtor friends say. How do you get rid of a lot of houses quickly? One potential idea is to convert them into affordable housing under the HUD Section 8 program, helping families who had no shot at home ownership even with absurd lending policies actually get started. The downside to this idea, at least from some folks who’ve commented to me, is that middle class homeowners will strongly fight any mixing of income classes in their neighborhoods.

A second idea for reducing supply, radically proposed, is demolition of the existing homes. In certain cases, this might make sense, especially if there are entire neighborhoods that lay fallow. Dismantle them for supplies as much as possible, and convert that section of a city into a community park.

A third idea, and the one I like best, is to use bailout money to buy out foreclosures at fire sale prices and deed over the properties, many of which need repairs, to a private agency like Habitat for Humanity, which employs a more rigorous screening process than HUD and forces future homeowners to put in significant sweat equity to create a true sense of responsibility and ownership.

We also need economic growth. Look around America. Bridges, rail systems, roads, public schools, the entire infrastructure is rotting away. Instead of giving Wall Street a handout, let’s agree to rebuild Main Street – it needs it. These are jobs that are inherently American and can’t be outsourced or shipped overseas. These are also projects that pay a dividend over time – improved roads, schools, parks, and civic infrastructure contribute to both morale and commerce.

To trim the budget and pay for at least some of this, we need to get out of Iraq. Win or lose, right or left, Iraq is a money sinkhole. No matter how well you think we’re doing, we can’t afford it. 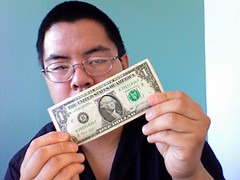 To address the savings issue, I’d take the lesser portion of the bailout funds and instead of paying off Wall Street, create massive tax incentives for saving. Since Congress is clearly in the mood to spend anyway, I’d waive all taxes on savings accounts, certificates of deposit, Treasury bills and bonds, and non-investment vehicles for 2 years, encouraging anyone and everyone to sock away as much money as possible. A savings account that earns a meager 3% interest looks a whole lot better when interest earned is 100% tax free. This will also have the net effect of recapitalizing depository banks, which is something they’ve been desperately trying to do on Wall Street.

Will these ideas cure the ailing economy? No. Will they help? Yes. They address the fundamental issues of supply and demand far more effectively than giving Secretary Paulson a wheelbarrow full of cash and a hug, which is about all the current proposal entails. Only time and the free market can flush out the crap that’s in our system, but by focusing the majority of money on the power base of America – us, the taxpayers – we might get some long-term good out of this.